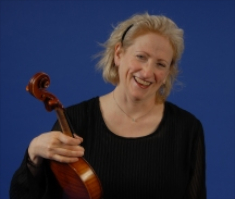 Helen Reich joined the MSO viola section in 1988. A native of New Jersey, she attended Juilliard Pre-College throughout her high school years and spent her college education at Indiana University. She attended graduate school at both Cleveland Institute of Music and Syracuse University, and has been a member of orchestras in Syracuse, Fort Worth, Sacramento, and Caracas.