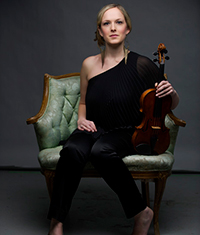 A native of Oakland, California, violinist Margot Schwartz has appeared as soloist with the Berkeley Symphony, Oakland East Bay Symphony, Northwestern University Chamber, and Music Academy of the West Festival orchestras. As a chamber musician, in which capacity she has performed extensively on both violin and viola, she has been a winner of the Yale School of Music’s annual Chamber Music Competition and has performed at New York’s Bargemusic and at the Kennedy Center.

An enthusiastic traveler, Margot has performed orchestrally in over twenty countries as well as on a substitute basis with the San Francisco Symphony, St. Louis Symphony, Saint Paul Chamber, and Minnesota orchestras. Margot has served as concertmaster of the Yale Philharmonia, Tanglewood Music Center, Music Academy of the West, and Oberlin Chamber orchestras. Additionally, during her time as principal second violin of the Civic Orchestra of Chicago, she was chosen to perform on the Chicago Symphony Orchestra’s MusicNow series.

While a graduate student at Yale, Margot taught violin at the Lincoln-Bassett School in New Haven, Connecticut as part of the Yale School of Music Class of ’57 “Music in Schools” initiative. She has also taught at the Music Institute of Chicago, and since moving to Milwaukee has begun coaching chamber music at Homestead High School in Mequon.

In past summers, Margot has participated in the Aspen, Weathersfield, Tanglewood, and Music Academy of the West festivals, and she currently performs at the Bellingham (WA) and Peninsula (WI) Music festivals.