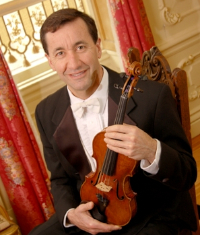 Michael Giacobassi grew up in Muskegon, Michigan and began studying the violin at age nine. He received his music degree from Michigan State University where he studied with Walter Verdehr. He joined the Milwaukee Symphony in 1974 and became a member of the Milwaukee Chamber Orchestra in 1975.

Mr. Giacobassi has appeared in recital at Blue Lake Fine Arts Camp and is a member of the Washington Island Chamber Music Festival. He was a soloist with the Milwaukee Symphony in statewide performances of Mozart's Violin Concerto No. 4 (Lucas Foss, conductor), Vivaldi’s Spring in April 2005, and has performed Mozart's Violin Concerto No. 2 with the MCO. In addition to orchestral playing, Mr. Giacobassi teaches aspiring young musicians and coaches violinists in the Milwaukee Youth Symphony.