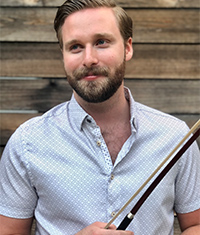 After growing up in the Chicago suburbs, Peter Hatch returned to the Midwest and joined the Milwaukee Symphony Orchestra in September of 2022. He received his Bachelor of Music degree from Rice University’s Shepherd School of Music where he studied with Timothy Pitts. During his time at Rice, Hatch performed with the Houston Symphony Orchestra and the San Antonio Symphony Orchestra as a substitute musician. Reveling in presenting audiences with diverse repertoire, he was seen performing in outdoor concerts, movie film scores, pops concerts, fiestas for Hispanic Heritage Month, and the Houston Symphony opening night gala. He also attended festivals such as Canada’s Domaine Forget, the Wabass Institute in Indiana, and the Verbier Festival in Switzerland.  Upon graduating, Hatch was awarded the Louis Sudler Prize in the Arts, which is designated “to recognize outstanding performance and promise in an undergraduate at Rice in architecture, art/art history, or music.”

Hatch is also a graduate of the Juilliard School, as a proud recipient of the Kovner Fellowship. His primary teachers were Harold Robinson and Rex Surany of the Philadelphia Orchestra and Metropolitan Opera respectively. Since this time, he has performed with the Philadelphia Orchestra, Metropolitan Opera, Chicago Lyric Opera, Kansas City Symphony, Dallas Symphony Orchestra, Atlanta Symphony Orchestra, and the Milwaukee Symphony Orchestra. As the winner of the International Society of Bassists Orchestra Competition, he performed with the Minnesota Orchestra. Following a season of auditions, he won a position in the Milwaukee Symphony Orchestra and was given a one-year contract with the Grant Park Music Festival in Chicago. In addition to performing, he has several students at Stevenson High School where he is a Patriot Recreation Education Program (PREP) instructor.