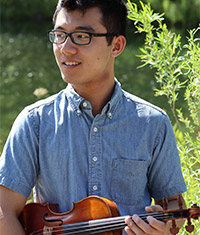 Shengnan has won many prizes in both national and international violin competitions, such as the 2011 Hongkong Violin International Competition and the 2012 Gold Bell violin Competition of China.

Born in Tianjin, China, Shengnan started his violin study at the age of five. He attended the middle school attached to the Central Conservatory of Music in Beijing, China, at the age of 13, where he studied with Weidong Tong. He earned his bachelor’s degree from the New England Conservatory where he studied under Nicholas Kitchen of the Borromeo String Quartet. He recently received his master’s degree from The Shepherd School of Music at Rice University under Kathleen Winkler.