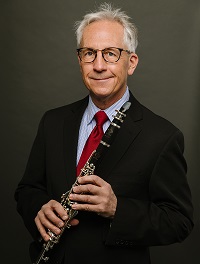 William Helmers joined the Milwaukee Symphony in 1980. He has also been a member of the contemporary ensemble Present Music since the group’s inception. He has worked with many other orchestras, including Pittsburgh, St. Louis, Cleveland, Ravinia Festival, Santa Fe Opera and Rochester. Mr. Helmers is active in commissioning, performance and recording of new music; he gave the North American premiere of John Adams' clarinet concerto, Gnarly Buttons, with the composer conducting, and the world premiere of James Grant's Concerto for Bass Clarinet.  Mr. Helmers has made numerous premiere recordings of solo and chamber music, including compositions by Roberto Sierra, James Grant, Kamran Ince, Jerome Kitzke, and others.

Mr. Helmers performs chamber music throughout the year in many different settings. He is a founding member of Musaik, a consortium of Milwaukee musicians, and in summers he attends the Washington Island Music Festival. He has been a member of the Portland-based Westwood Wind Quintet, participating in many of their recordings for Crystal Records. Recently, he has enjoyed regular engagements with the Little Lake Stompers, a traditional jazz group.

When away from the clarinet, William enjoys time spent with family and friends. He looks forward to golf, canoeing and kayaking, cross-country skiing, and being out with his two dogs, Teddy and Luna.