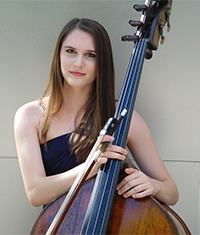 Double bassist Brittany Conrad joined the Milwaukee Symphony Orchestra in September of 2022. Originally from  Lancaster, Pennsylvania, Ms. Conrad received her bachelor’s degree from the Colburn Conservatory of Music, where she studied with Peter Lloyd, and her master’s degree from the Juilliard School, where she studied with Harold Robinson and Rex Surany. She has also worked extensively with Joseph Conyers.

During the summer of 2019, Ms. Conrad was a fellow at the Tanglewood Music Center. Additionally, she has spent three summers as a member of the Verbier Festival Orchestra in Verbier, Switzerland, and has participated in programs such as the New York String Orchestra Seminar, the Wabass Institute, and the Perlman Music Program.