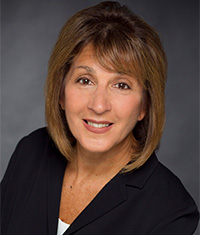 Dr. Frazes Hill is now in her third season as director of the Milwaukee Symphony Chorus. In addition to her role in Milwaukee, she is the associate conductor of the Chicago Symphony Chorus, where she has assisted CSO Chorus Music Director Duain Wolfe for more than 20 years. Frazes Hill has also served as director of choral activities at Roosevelt University since 2002.

During the 2019.20 season, Frazes Hill will prepare the Milwaukee Symphony Chorus for performances of Handel’s Messiah, Mozart’s Requiem, three choral works by Brahms and Dvořák’s Te Deum, among others.

Frazes Hill received her Doctorate in Conducting and her Master of Music degree from Northwestern University and two undergraduate degrees from the University of Illinois. An accomplished vocalist, she is a featured soloist, nominated for a Grammy Award in the CBS Masterworks release Mozart, Music for Basset Horns. During her years of teaching, Frazes Hill has earned numerous awards, including the Illinois Governor's Award, the Northwestern University Alumni Merit Award, the Commendation of Excellence in Teaching from the Golden Apple Foundation, the Outstanding Teaching Award from the University of Chicago, and the Roosevelt University Presidential Award for Social Justice.

Frazes Hill is a frequent guest conductor and guest speaker. As a clinician, she conducts festivals and concerts throughout the country.  Under her direction, the Roosevelt University choruses have been featured in prestigious and diverse events including appearances at national and regional music conferences, and performances with professional orchestras including the Chicago Symphony Orchestra, Chicago Sinfonietta,  Civic Orchestra of Chicago, and the Illinois Philharmonic. Among recent performances, the Roosevelt Conservatory Chorus received enthusiastic reviews for their American premiere performance of Jacob Ter Velduis’ Mountaintop. Other recent performances have included Frazes Hill’s choral preparation of the internationally acclaimed Defiant Requiem, and a staged production of Considering Matthew Shepard. Dr. Frazes Hill is a published writer for national education and choral journals on topics of her research in music education and choral conducting.