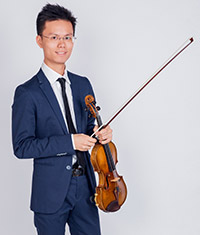 Chi Li is regularly invited to perform across North America, Asia, and Europe. As such, he has performed in concerts, chamber music recitals, and as a soloist with the Montreal Symphony Orchestra and l’Orchestre de Chambre de Toulouse at venues such as Jordan Hall in Boston, Salle Pleyel in Paris, as well as Maison Symphonique in Montreal.

He has received numerous prizes and awards, including the Jules C. Reiner prize and the 2013Montreal International Music Competition.

He joined the Milwaukee Symphony Orchestra during the 2017.18 season and serves as a violinist in the first violin section.