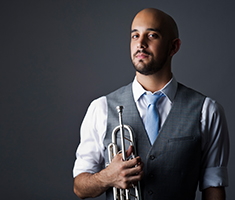 Mr. Cohen received his Bachelor’s of Music from Northwestern University where he studied with Barbara Butler and Charles Geyer. He was appointed Principal Trumpet of the Tucson Symphony Orchestra during his senior year of college.  He spent one summer attending the National Orchestral Institute in College Park, Maryland and two summers as a fellow at the Tanglewood Music Festival in Lenox, Massachusetts. Mr. Cohen has had additional studies with Thomas Rolfs and Christopher Martin.  Mr. Cohen is on faculty at the DePaul School of Music in Chicago.