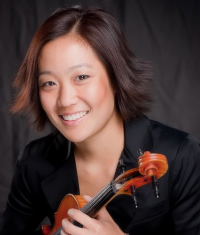 Originally a double major candidate in Engineering and Violin Performance at the University of Michigan, Dylana transferred to the Cleveland Institute of Music to continue her studies with Paul Kantor, where she received her Bachelor of Music degree and Professional Studies Certificate. She then spent a year studying with Robert Chen, concertmaster of the Chicago Symphony Orchestra at the Chicago College of Performing Arts. Other notable teachers include Cyrus Forough and Stephen Rose.

Dylana was 2nd prize winner of the 2000 Stulberg International String Competition and National Finalist at the American String Teachers Association Competition. As 1st prize winner in various Young Artist Concerto competitions, she has appeared as soloist with the DuPage, Elmhurst, Evanston, Northwest, and Chicago Youth Symphony Orchestras. She also spent several summers at the Aspen Music Festival as a Fellowship Recipient.

An avid runner, Dylana frequents the Oak Leaf Trail and finished the 2011 Chicago Marathon in 3:53. She splits her time between Milwaukee and Chicago, where her husband Dave lives and works. During college football season, she follows her Wolverines, and will happily watch the Badgers post a win to the Buckeyes any day.