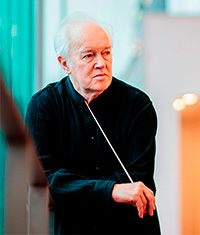 As an opera conductor, de Waart has enjoyed success in a large and varied repertoire in many of the world’s greatest opera houses. He has conducted at Bayreuth, Royal Opera House Covent Garden, Grand Théâtre de Genève, Opera de Bastille, Santa Fe Opera, Salzburg Festival, and The Metropolitan Opera. Recent appearances at The Met have included Der Rosenkavalier and The Marriage of Figaro.

Edo de Waart has received a number of awards for his musical achievements, including becoming a Knight in the Order of the Dutch Lion and an Honorary Officer in the General Division of the Order of Australia, in reflection of his invaluable contribution to Australian cultural life during his decade with the Sydney Symphony. He was also appointed an Honorary Fellow of the Hong Kong Academy for Performing Arts in recognition of his contribution to music internationally, and in particular, his commitment to developing future generations of musicians in Hong Kong.