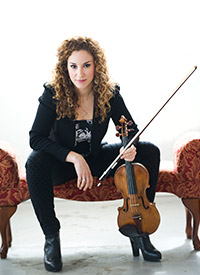 In recent seasons Setapen has had solo performances with the Milwaukee Symphony, Festival City Symphony, and the Amarillo Symphony, among others. Since winning her job in the Milwaukee Symphony in 2009, she has been offered a solo every season. She
also held the Assistant Concertmaster position of the Grant Park Music Festival Orchestra in Chicago for 6 years and is a favorite guest concertmaster with the Chicago Philharmonic. In recent summers she has performed at the Olympic Music Festival on Bainbridge Island and the Lakes Area Music Festival in Brainerd, Minnesota. She has also taught and performed as faculty at Center Stage Strings at the University of Michigan and the Luzerne Music Center summer festival in Lake Luzerne, New York.

Also a committed chamber musician, Setapen is in demand as a collaborator throughout the midwest. She is a frequent guest on the Frankly Music Series, and she performs with colleague Margot Schwartz in the duo Bowing Rogue. Her talent has led her to collaborations with such distinguished artists as Ron Leonard, Lynn Harrell, Toby Appel, Cynthia Phelps, Joseph Kalichstein, Robert DeMaine, Paul Coletti, the Fine Arts Quartet, Stefan Hersh, David Geber, and Joan Tower. Solo and chamber music performances have brought her abroad to China, France, Brazil, Holland, England, Monaco, and Italy.

Setapen grew up in Amarillo, Texas. She comes from a musical family: her father is a conductor and her first violin teacher was her mother, Carol. She was a student of Robert Lipsett both at the University of Southern California and at the Colburn Conservatory. She received her Master of Music Degree from the Juilliard School as a student of Donald Weilerstein and Ronald Copes. Also a dedicated educator, she teaches privately as well as at the successful Advanced Chamber Music Institute at the Wisconsin
Conservatory.

In her spare time Setapen enjoys spending time with her husband and young son, cooking, and swing dancing.