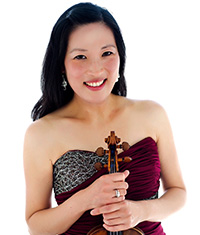 Jeanyi Kim is the Associate Concertmaster (Third Chair) of the Milwaukee Symphony Orchestra, and Concertmaster of Milwaukee Musaik (also known as the Milwaukee Chamber Orchestra).  A Toronto native, Kim's command as a violinist and orchestral musician have brought her to illustrious venues around the world, including Carnegie Hall, the Barbican Centre, Salle Pleyel, and the Concertgebouw.  As a guest, she has appeared as Assistant Leader of the London Symphony Orchestra (UK) under Sir Colin Davis and Valery Gergiev, Concertmaster of the Kalamazoo Symphony Orchestra, Principal Second of the National Arts Centre Orchestra, and substitute musician of the Philadelphia Orchestra.  Of her featured solo recital, the Journal Sentinel praised her performance, drawing likeness to that of "a glamorous international star."  Kim is equally comfortable in soloist, chamber, and orchestral roles as well as a variety of styles, and her playing has been described as "engrossing…intelligent," and simultaneously having "easy grace" (Journal Sentinel) and "fistfuls of technical fireworks." (Urban Milwaukee)

Recent solo appearances include performances with the Milwaukee Symphony Orchestra, Milwaukee Musaik Chamber Orchestra, Sunflower Music Festival Orchestra, Kenosha Symphony Orchestra and Sheboygan Symphony Orchestra.  A passionate and energetic chamber musician, Kim is a founding member of the Philomusica Quartet, and is a regular artist at the esteemed Sunflower Music Festival. She has performed in a number of prominent chamber music series, including Frankly Music, Dame Myra Hess, Fine Arts at First, Searl Pickett, as well as on radio broadcasts for Wisconsin Public Radio, WFMT Chicago and Kansas Public Radio. In addition, she serves as Vice President of the Board of Milwaukee Musaik.

A dedicated teacher, Kim has held faculty positions at various institutions, including University of Wisconsin-Parkside and University of New Haven, and during summers has taught at several festivals, including the Eleazar de Carvalho International Music Festival (Brazil) and the Elm City ChamberFest.  Under her guidance, many of her students have gone on to win various prizes and honors.  Kim is also a frequent adjudicator of competitions.  Her major teachers include Erick Friedman, Kyung Yu, Rebecca Henry and Berl Senofsky, and important mentors include Aldo and Elizabeth Parisot, Sidney Harth, and Tokyo String Quartet.  As a graduate student at Yale, she served as a teaching assistant to Erick Friedman.  Kim holds a DMA from Yale University, where she also earned her BA, MM, and MMA degrees.  As an undergrad, Kim was the recipient of the Bach Society Award.

Kim recorded for a Boosey & Hawkes publication/CD entitled, 10 Violin Solos from the Masters, released by Hal Leonard.  She performs on a 1705 Petrus Guarnerius violin.

She and her husband, violinist and conductor Alexander Mandl, enjoy the adventures of raising their two young children, Miranda and Nikolas, frequenting their favorite coffee shops, biking, sailing, and traveling.

More information on Philomusica Quartet and Milwaukee Musaik can be found here: