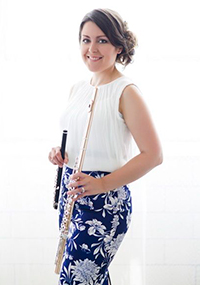 Jennifer Bouton Schaub has played flute and piccolo with the Milwaukee Symphony since 2011. From 2014-2016, Ms. Schaub performed as Acting Second Flute with Lyric Opera of Chicago. Prior to joining the MSO, she was a member of the Virginia Symphony for three seasons. She has also performed with the Chicago Symphony, Detroit Symphony, Australian Opera, Australian Ballet, Colorado Symphony, and Akron Symphony, among others.

Ms. Schaub received a Master of Music degree and Certificate in Advanced Flute Studies from Carnegie Mellon University, and a Bachelor of Music degree from the Peabody Conservatory. Her teachers include Jeanne Baxtresser, Alberto Almarza, and Marina Piccinini. Recent projects include assisting Jeanne Baxtresser, former principal flute of the New York Philharmonic, with the publication of the revised edition of Ms. Baxtresser's classic book, Orchestral Excerpts for Flute (Presser). She is faculty at Wisconsin Lutheran College, and maintains a small private teaching studio out of her home in Bayview. Originally from Denver, Colorado, in her spare time Jennifer enjoys yoga, hiking, and being outdoors with her two young daughters and husband.