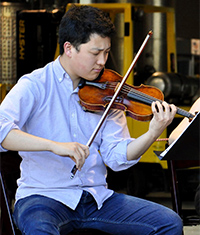 Violinist John Bian, born in St. Paul, Minn., is an active orchestral musician who has studied with many notable concertmasters across the country. He is seen frequently in violin sections of major orchestras such as the Cleveland Orchestra, Minnesota Orchestra, St. Louis Symphony Orchestra, and Detroit Symphony Orchestra. In addition to his large ensemble career, Bian is also a passionate chamber musician having studied with members of the Cleveland Quartet, Cavanni Quartet, Calidore Quartet, and Muir Quartet.

Bian earned his bachelor’s degree at Boston University where he studied with Yuri Mazurkevich. At BU, he was the grand prize winner of both the Solo Bach Competition in 2012 and the Concerto Competition in 2014. Bian went on to complete his master’s degree at the Cleveland Institute of Music where he studied with William Preucil, the concertmaster of the Cleveland Orchestra and was also a member of the Intensive String Quartet program. He then finished his schooling at the University of Michigan studying under David Halen, concertmaster of the St. Louis Symphony Orchestra, and Yoonshin Song, concertmaster of the Detroit Symphony Orchestra, receiving his Specialist Degree in 2018.