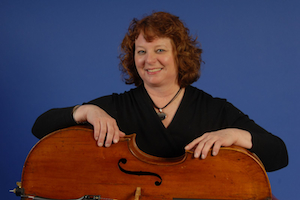 Kathleen Collisson earned a performance degree at Chicago Musical College of Roosevelt University as a scholarship student of Karl Fruh and received further training with Raya Garbousova and Frank Miller. An active freelancing career and three seasons with the Civic Orchestra of Chicago were also an integral part of her education. She performed with the Grant Park Symphony, Lyric Opera of Chicago, and Chicago Chamber Orchestra before joining the Milwaukee Symphony cello section in 1977.

She has been a member of Milwaukee Chamber Orchestra since the 1980s, and performs with several groups in the MSO's ACE program. Kathleen began teaching while still in high school, and also teaches at Summerkeys, an adult education program in Lubec, Maine. She has also been a section coach for MYSO and an outreach clinician. In 1997, Kathleen earned an MFA in creative writing, and has since developed an ACE program for 6th graders which integrates music and poetry. She also developed and taught a program on instrument-making for UWM’s College for Kids, and has taught creative writing at Woodland Pattern and the Wisconsin Center for Gifted Learners. In 2004, she began studying baroque cello and historical performance practice, and has attended institutes in Toronto, Cambridge, and Madison.

Kathleen lives in Shorewood, and has two grown children and a golden doodle named Lucy.