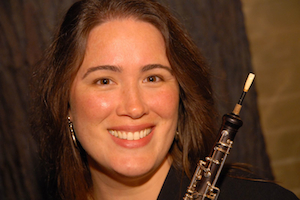 Margaret Butler grew up in Rhode Island where she began her studies on the recorder and flute. A love for the sound of the Baroque oboe led her to study the modern oboe. She received her Bachelor of Music degree from the New England Conservatory of Music and her Master of Music degree from Rice University’s Shepherd School of Music. Margaret participated in the Banff Summer Music Festival where she was a featured soloist and has also played in Graz, Austria with the American Institute of Musical Studies.