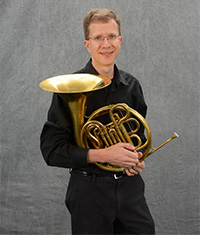 Matthew Annin has held the position of principal horn of the Milwaukee Symphony Orchestra since 2011. He also regularly performs with the Grand Teton Music Festival. A native of Lincoln, Nebraska, Matthew was previously a member of the Cincinnati Symphony Orchestra, the Rochester Philharmonic Orchestra, the Louisville Orchestra, and the Peninsula Music Festival. He has also performed with the San Francisco Symphony, the Saint Louis Symphony, Buffalo Philharmonic, Chautauqua Symphony, and Chicago’s Music of the Baroque, and Grant Park Orchestra. Matthew was a fellow at the New World Symphony, Tanglewood Music Center, and Music Academy of the West, where he appeared as soloist with the Music Academy Festival Orchestra. He has appeared as soloist on several occasions with the Milwaukee Symphony Orchestra under the direction of Edo de Waart, Francesco Lecce-Chong, and Ken-David Masur, and also as guest soloist with the Milwaukee Youth Symphony Orchestra.  Matthew performs on Kortesmaki horns, made by Michigan horn maker, Karl Hill.