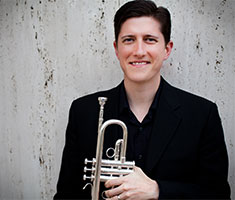 A dedicated educator, Matthew has also held teaching positions at the University of Virginia, the University of New Orleans, and the New Orleans Center for the Creative Arts. He and his wife, Janna, a vocal coach and accompanist, tour extensively as a duo, giving performances and masterclasses across the country.

Matthew pursued his Bachelor of Music degree from the University of Michigan, where he studied with William Campbell. He received two Master of Music degrees from Southern Methodist University—the first in trumpet performance, studying with Tom Booth of the Dallas Symphony Orchestra, and the second in wind conducting. In addition to his degree work, he was also a fellow at Tanglewood Music Center and attended the Pacific Music Festival and Brevard Music Center.

Matthew resides in Shorewood, WI with his wife, Janna, and their two daughters, Madeleine and Margaret.