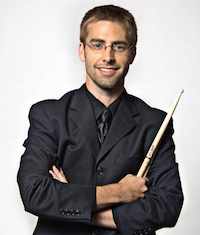 A native of Dallas, Texas, Robert Klieger has been a member of the West Virginia Symphony and the Canton Symphony. For the 2009-2011 seasons, he held a fellowship with the New World Symphony under the direction of Michael Tilson Thomas where he performed both in the orchestra and as a soloist. He has also performed with the Cleveland Orchestra, the San Diego Symphony, the Kansas City Symphony, the Honolulu Symphony Orchestra, and the Toledo Symphony Orchestra.

In 2008 he was invited to perform with the Cleveland Orchestra on tour in Salzburg and Lucerne. Robert holds a Bachelor of Music degree from Southern Methodist University, where he studied with Douglas Howard and Kalman Cherry. He completed post graduate work at the Cleveland Institute of Music, where he was a student of Richard Weiner and Paul Yancich. He has attended various summer festivals including: the Aspen Music Festival, the Verbier Festival, (Switzerland), and the Center for World Music Workshop and Festival in Bali, Indonesia. This season Robert also joins the Santa Fe Opera orchestra as principal percussionist.