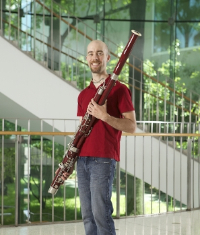 Rudi Heinrich grew up in Ann Arbor, Michigan, where he first started playing music in the public school music program. Rudi completed his senior year of high school at the Interlochen Arts Academy, and then earned his Bachelor’s degree at the University of Michigan where he studied with Richard Beene. He went on to work with William Winstead at the University of Cincinnati, where he received his Master’s degree.

Rudi Heinrich is happily married to his wife, Meaghan, and has two amazing kids, Paul and Margie. When not wrestling with reeds or playing with the kids, Rudi enjoys growing curious facial hair, dabbling in other unwieldy instruments, and rooting for the Wolverines.