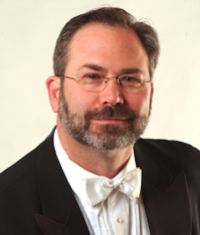 Timothy Klabunde has performed with the Milwaukee Symphony Orchestra since 1980 and is currently the Assistant Principal Second Violin. MSO tours have taken him to the great concert halls of Japan, Germany, Austria, the Netherlands, England, and Cuba. A native Milwaukeean, Mr. Klabunde studied violin with Leonard Sorkin, Abram Loft, and chamber music with Bernard Zaslav and George Sopkin, members of the Fine Arts Quartet at the University of Wisconsin-Milwaukee.

He has been heard on live broadcasts for WFMT Chicago’s Dame Myra Hess Series and Wisconsin Public Radio’s Sunday Afternoon at Chazen. Timothy has appeared as violin soloist with the Milwaukee Symphony Orchestra, the Milwaukee Chamber Orchestra and the Manitowoc Symphony and as concertmaster of the Milwaukee Ballet Orchestra. He has performed at the Festival de Belles Artes in San Miguel, Mexico and the Fourth Annual International String Quartet Competition in Evian, France. From 2004 through 2017, Timothy appeared at the Washington Island Music Festival. He has also recorded for many television, radio and stage productions. Mr. Klabunde performed for ten years as a member of the Prometheus Trio at the Wisconsin Conservatory of Music.