“It’s been going very, very well,” said Cheryl Frazes Hill, finishing her second season as MSO chorus director. “I’ve been thrilled to do so many classic works and to give them a different perspective. It’s been very enjoyable for the chorus and for myself.”

With two years of familiarity, Frazes Hill has set up re-audition procedures; she will hear all women this summer and all men next summer. “I know it’s stressful for them,” she said, but it’s a chance to speak with them individually about what they might need to work on. “Volunteering for a chorus like this is a huge commitment,” she said. “It’s a pretty rigorous schedule.”

Carmina is a repertory staple, but Frazes Hill said, “It’s more difficult to rehearse when people have done it before, particularly with different conductors.” In this case, she has spent time researching the pronunciation of the three languages used in the cantata: secular medieval Latin, Middle High German, and Old French. “It’s different from the way they’ve done it before, which is not to say the other way was wrong,” she said, “but I feel good about this version.” Another challenge is that because of the piece’s repetitive rhythms and harmonies, “it’s very easy for the third verse to be less energetic or have less dynamic contrast than the first verse.”

She also has to keep the chorus from wearing out during rehearsal, because the tessitura, or average range, is fairly high. “We have to use the text to make the emphasis, as opposed to oversinging,” she said. “It’s about spring, the tavern, the joy of love.”

But the famous opening chorus, “O Fortuna,” is not about those things. “It should be ominous,” Frazes Hill said. “It’s a message about the helplessness of human beings. We are subject to fate, and fate often does not treat us kindly. It can’t sound happy and dance-like.”

Frazes Hill has talked briefly with Francesco Lecce-Chong, who will conduct the concerts, but the chorus “has to be prepared to do it in any way the conductor expects,” she said. She will deliberately rehearse at two or three different tempos to prepare the chorus for different possibilities, and she asks them have the music mostly memorized.

Carmina also requires children’s voices, which is a big opportunity for the top singers in the Milwaukee Children’s Choir. “It’s definitely a topic of conversation wherever they are,” said Lynn Swanson, who is finishing her first year as the group’s executive artistic director. The children have two numbers of their own and will also join in the soprano and alto parts on the final chorus of “O Fortuna.”

Rehearsing the young people to join a symphony performance is similar to the adults’ process – learn pronunciation, be flexible, be prepared for what the conductor might want. “It’s not just singing it the way you heard it on the practice recording,” Swanson said. The children’s choir staff also remind singers of the important of sitting quietly when they’re not performing, but the kids already have some experience of that from performing with Milwaukee Ballet. “They’ve learned how to get into the pit and out of the pit quietly,” Swanson said. “The older ones quickly tell the younger ones how it’s done.”

Frazes Hill is looking forward to the opening in 15 months of the MSO’s new concert hall, with its permanent choir loft, and to the arrival this fall of Ken-David Masur as music director. “The chorus just loved working with him” during his visit as a guest conductor, she said, “and he has a great love of choral music.”

And next weekend will also begin a new tradition of a short backstage ceremony to honor singers who are retiring from the chorus. “It’s a very special group of people and a thrill to get to know them,” Frazes Hill said. 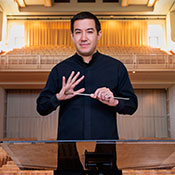