When singer-songwriter Ann Hampton Callaway performs this weekend with the Milwaukee Symphony, she won’t do any of her own compositions – except the one she makes up on the spot.

Callaway, who straddles worlds as an interpreter of the great American songbook and as a writer of songs for herself and others, will be concentrating on the former side in Milwaukee, as the “Diva to Diva” title of the program suggests. But for one number, she will ask the audience to suggest words and phrases, which she will make into a lyric, and then improvise a melody for it at the piano. Her trio, which can “psychically follow me,” will provide accompaniment, and she’ll ask the orchestra to join on the last chord.

What makes it possible, she says, is that she tends to approach a song words-first. “The moment I see words, I hear music,” she said. But if she thinks of a melody first, “it can take months to figure out what it’s about.” For Callaway, it all comes back to telling a story.

Callaway’s tour gigs can vary from just herself at a piano in a club to events such as the MSO pops concert, with 80 musicians behind her and 2,000 spectators in front of her. “But I’m always aiming for the same thing,” she said. “It’s about communicating, telling the story of the song.”

The “great American songbook” is an informal term, but it’s generally associated with enduring popular songs written from the 1920s to the 1950s. “They’re songs that become more beautiful over time, like the great architecture of Europe,” Callaway said.

Many of the standards have been sung by so many great artists that there is no definitive version, but there are exceptions. Callaway avoided “Over the Rainbow” for many years because it seemed to belong to Judy Garland, but she has found a way to make it her own. “These songs do belong to everyone,” she said. “It’s amazing how they grow over time, in the hands of people with good interpretations.”

But writing a great song requires some risk and some self-revelation, she said. Much of the work of the Gershwins, Porter, Kern and others from that period was written to be sung by characters on stage or screen, giving the creators a certain emotional insulation. Callaway, who sees her work as “part of the new great American songbook, chapter two,” says that her songwriting requires baring her soul and “learning something about myself. I like sharing what I feel and how I see the world.”

That’s one reason why Callaway shies away from contemporary pop music. “It’s less storytelling and more pyrotechnics and sports,” she said. “There’s almost a machismo that I don’t relate to.”

She grew up in a musical household and studied classical voice for a time. But she also heard a lot of jazz. “Ella Fitzgerald was a huge voice in my childhood,” she said. “Billie Holliday, Sarah Vaughan, Barbra Streisand when she was young.” (In later years, Streisand has recorded some of Callaway’s songs.) But Callaway also lists other influences who will be saluted this weekend: “Judy Garland, in The Wizard of Oz and other old movies. She sang as if her life depended on it. Nina Simone, any song that she sang, she made hers alone. Each one of them had something to teach me, and I’m very grateful to them.”

Sometimes when she sings she will think of herself as an actress, wondering how she would sing a particular song if it were the last day of her life, or saying goodbye to a friend forever. But for her, a concert is always “an opportunity for a safe place to share songs and stories and bring people together, and remind people that being alive in this world is a beautiful thing.” 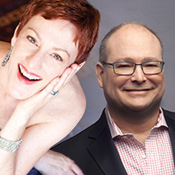 Oh, to have been at that party: Gershwin and Friends