The MSO’s assistant principal flute bought a late-1800s house in the historic neighborhood of the city three years ago, and “one thing that’s really cool about living in Brewers Hill is thinking back to those early days when there were no suburbs,” she said. “So people of all careers and all income levels would live closer together and walk to work, school, and shops.”

She herself usually walks the mile or so to her new workplace at the Bradley Symphony Center. Getting to know the hall over the past few months has been “kind of overwhelming,” she said. “I’m just blown away by the acoustics. It’s nice to experience it in this intimate way, but I’m so excited to see what the hall can do when it’s totally filled.”

The pandemic, among many other things, offered Yarmel a chance to work on her gardens. MSO bassoonist Beth Giacobassi gave her perennials from her own yard, and she is finding what works in sun and shade.

She also spent some of the extra time exploring new repertoire. The MSO’s 2021.22 season includes more works than usual by composers of color and other voices outside the museum tradition of classical music. “We need to play music by living composers. We have to grow,” Yarmel said. “We can’t continue in the ways we’ve always done things and expect to have a growing audience. And as musicians, we benefit from pushing ourselves. But I still want to play Beethoven, too.”

When an orchestra plays an unfamiliar work by a living composer, Yarmel suggests that listeners look for patterns in the orchestral colors, rather than waiting for a catchy tune. “Just because something sounds different doesn’t mean it’s noise,” she said. “I sometimes wish we could play short modern pieces twice, to give people more of a chance to get it.”

Yarmel grew up in a musical family in Louisville, Kentucky, earned performance degrees from Eastman and Rice, and then spent five years as principal flute in the Louisiana Philharmonic. She enjoyed her time with that musician-run orchestra in New Orleans, but continued to audition for jobs that might pay more and let her be nearer to her husband.

The couple met when both were undergraduates at Eastman; Aaron Yarmel is now a PhD candidate in philosophy at UW-Madison. The job market for humanities scholars is as challenging as it is for orchestra musicians, and the two were resigned to a long-distance marriage. So when a one-year flute position opened up at the Milwaukee Symphony in 2016, “I was like, wow, I could be in the same state as my husband!” Yarmel won that audition and enjoyed her first season in Milwaukee, and when she auditioned for the permanent position a year later, “it was the most pressure I ever felt.”

“Heather is so easy to work with,” said MSO piccolo and flute player Jennifer Bouton Schaub, “and she has a gorgeous approach to making music. It’s different from [principal flute Sonora Slocum] and me, but it’s very complementary. She’s extremely flexible and extremely supportive, and the balance is just great. She’s the glue of the section.”

“The main job of the second flute is to support the first flute and help them sound their best,” Yarmel said. “But there’s a chance to do different things every once in a while.” The first movement of Dvorak’s New World Symphony, for instance, has more second flute solos than first, she said, and she gets more chances to play piccolo in her current role.

The pandemic turned out to be another opportunity for the Yarmels to spend time together, since Aaron could teach remotely. Heather gave a lot of virtual flute lessons, and found a way to work around the lag time that prevents musicians from playing duets over Zoom: she turned her volume all the way down, played her part, and let the student play along.

She also spent more time cooking. Yarmel has been a committed vegan for nearly a decade and maintains a recipe website, flutesandveggies.com. “I love sharing food with people,” she said, “and people don’t appreciate how intelligent and personable animals are. I’ve met many individual cows, pigs, and chickens at farm animal sanctuaries, and they deserve the same care and respect that we give our dogs and cats. And I’ve been eating a diet that is healthier for me as well.” 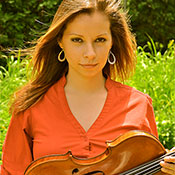