When the Milwaukee Symphony moves into its new hall this fall, patrons will have the option of snacking on local sausage and cheese and sipping brandy old-fashioneds.

Plans for food and beverage service in the Bradley Symphony Center are moving ahead, as the symphony for the first time will be in charge of its own refreshment program. Resonance Food Co., a joint venture of the MSO and Levy, has big plans for both the public spaces and the dedicated banquet and event rooms.

David Zakroczymski, the newly appointed culinary leader of Resonance Food Co., comes to the job after years as a top chef at Fiserv Forum, and before that at the BMO Harris Bradley Center. Levy creates the food and beverage experience at many stadiums, arenas, and convention centers around the country, as well as cultural attractions like Ravinia Festival in suburban Chicago. That experience and operational prowess will drive Resonance Food Co. at one of the highest profile concert venues in the company’s portfolio. “They’re excited to partner with us at the Bradley Symphony Center,” said Ana Cook, the symphony’s director of events and partnerships. “We’re so happy to be working with Levy because they’re experts in the field, they’re excited for what we’re doing, and they have experience with Milwaukee audiences.”

A basketball arena and a concert hall are at least somewhat similar, Zakroczymski said, because “everyone wants a cold beverage and something to eat,” but the symphony center will be aiming for melodious service and hospitality that speaks to the symphony’s unique audience and delivers on the orchestra’s commitment to a top patron experience. At various events, “we’ve all gotten a glass of wine in a plastic container,” Cook said, and the symphony will be investigating better possibilities for its patrons.

Although the new hall will contain two large permanent bars and several smaller portable ones, it will not have a sit-down restaurant open to the public. But the facility will be busy with banquets and other events, both its own programming and for rentals.

Food at the bars will be designed for quick service, but Zakroczymski is envisioning attractive packaging. And, he said, the vendors that supply the sit-down banquets behind closed doors will also supply the public concourses. “Our local companies have their own story to tell,” he said. After nearly two decades in Milwaukee, “I have a pretty good feeling for what the market wants and what the local culture is.” He hopes to work with local brewers, distillers, cheese and sausage makers, and coffee companies.

A semi-regular event may be banquets themed with the concert, such as cuisine from the same nation whose music is featured that weekend. The symphony hosted a gala dinner and reception at Saint Kate, the arts-themed hotel near the Marcus Center, for Ken-David Masur’s opening weekend as music director, and similar events “will be a lot easier with everyone in the same space,” Cook said.

Catering a banquet, with up to 350 servings of the same course going out of the kitchen at once, “is like a dance,” Cook said. The spaces on the second floor of the new atrium building “were designed with the thought of how to execute events and deliver experiences unique to us.” It will allow a higher level of service than the symphony was able to offer in the Marcus Center, where its space for donors was one corner of the atrium roped off on concert nights.

Analytic software that tracks orders will also make it possible for staff to be prepared for peak sales times, most popular orders, and in-demand catering menus. “It’s a robust way to make sure we’re providing what people need,” said Amanda Ridout, Resonance’s director of sales.

Event sales and service are part of the symphony’s long-term business plan, and “part of our financial stability for the future,” Cook said. “That’s the reason the atrium was built. We’re open and ready for booking.” And whatever short-term uncertainties there may be, “we’re looking years out.” 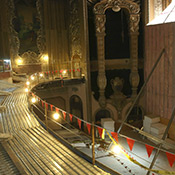 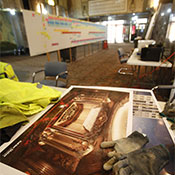 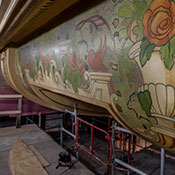