Growing up in Fox Point, Justin Hurwitz was a regular at Milwaukee Symphony concerts in the late 1990s and early 2000s. This weekend, the orchestra will perform his music as it plays the live soundtrack to the Oscar-winning movie La La Land at the Riverside Theater.

Hurwitz’s Oscar-winning score, an homage to the golden age of Hollywood musicals, contains plenty of jazz influences but also shows his classical roots. As a teenager, the Nicolet High School graduate studied piano with Stefanie Jacob, a frequent substitute keyboardist with the MSO and the wife of MSO cellist Scott Tisdel.

Hurwitz grew up loving the Disney musicals of the 1990s such as The Little Mermaid and Beauty and the Beast, but he absorbed a lot in Uihlein Hall as well. “It’s not really a direct influence, but I love Beethoven,” he said. “And Tchaikovsky and Berlioz – and Gershwin was an influence, the way he blended jazz and classical.”

But he never learned to play jazz piano properly, and it wasn’t until he studied music theory at Harvard that he understood “the grammar behind jazz, all those weird crunchy chords.”

Harvard was also where he met Damien Chazelle, an aspiring film director. “We would talk about movies he wanted to make and music I wanted to write, and how we could combine what we do,” Hurwitz said. Over the course of many years, their shared vision became last year’s hit musical about artistic dreams in Hollywood.

Unlike most movie composers, Hurwitz does all his own orchestration. “It was a ton of work, but I loved that part of the process,” he said. “It’s all about dialogue, as the instruments speak to each other.” He admires the composers for the French New Wave films, who created counterpoint in which instrumental lines “rub against each other in ways that contemporary film composers don’t let them.”

The songs to La La Land were built out of “hundreds and hundreds of piano demos,” Hurwitz said. “We’d have a song that was done, then we’d say ‘I think we can do better’ and throw it out and start from scratch.” Once Hurwitz and Chazelle agreed that they had a melody that would fit the moment in the film, they would send it to lyricists Benj Pasek and Justin Paul — a rare method of working, since Hurwitz said, “Usually music and lyrics happen at the same time, or in the same room.”

The purely orchestral soundtrack for La La Land serves the same function as the songs — to help tell the story. “Every score cue was built on melodic material,” Hurwitz said. “None of it was purely situational.” In fact, the way that Hurwitz and Chazelle brought back melodies in new forms is akin to Wagner’s use of leitmotifs.

Hurwitz sat in on all the recording sessions, which he called “one of the most fun parts of the process, to watch it come alive with professional musicians.” Veteran Los Angeles jazz pianist Randy Kerber, who recorded the soundtrack, will be in Milwaukee next week to participate in the MSO performances, and Hurwitz said the Riverside audiences are in for a treat. “It’s like a magic trick, getting to see him play it synched to the picture. I’ll be excited to hear from people in Milwaukee how it goes.”

As a young pianist, Hurwitz was “one of my most intelligent and challenging students,” Jacob remembers. “I couldn’t ever say ‘Do this’ and have him not say ‘Why?’” She and her husband went to see La La Land last fall without knowing about the connection, enjoyed the movie and the music, and stayed to watch the credits. “Regrettably, I screamed in the theater,” Jacob said with a laugh. “I went back and saw it again, to pay attention to the music — and I’ll see it for a third time with the live orchestra.” 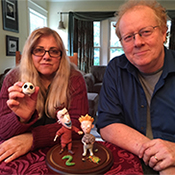