Conductor Ken-David Masur trained as a singer when he was younger. But now the most important singing he does is with his three children.

“We sing together in the car, or before bed – we have books of folk songs that we’re working through,” said Masur, who conducts the Milwaukee Symphony this week. “It builds a feeling of peace and a trusting relationship.” When he hears his kids, ages 10, 8 and almost 6, singing, “you know they feel happy, and we feel that that’s really special.”

And fostering that love of singing is a way that orchestras can both do good in the world and build their audience for the next generation. “Orchestras that have created choruses create a culture of families rallying to be part of the organization,” said Masur, whose program this week will also feature the Milwaukee Symphony Chorus performing in Ralph Vaughan Williams’ viola concerto, Flos Campi and in Ravel’s Daphnis et Chloé Suite No. 2.

Masur saw that himself as a child; his father, the famed German conductor Kurt Masur, started a children’s chorus for the Leipzig Gewandhaus orchestra, “and their parents became part of the support group that came to the concerts. And the choir directors are there not just for music. They become your teachers, your life coaches.”

Ken-David Masur dabbled on many instruments as a child, and was a talented enough singer to take voice lessons with the great bass-baritone Thomas Quasthoff, but despite his father’s high profile (Kurt Masur also led the New York Philharmonic in the 1990s), he never envisioned a musical career for himself. In the old East German system, his father “hired everyone from the janitor to the stagehands. He took care of the organization like a family. I felt I wasn’t equipped to do something like that.”

But as an undergraduate at Columbia University, “music found me,” he said. He experimented with composing, but “it took too long to put something down on paper. I decided I’d rather be on the interpretive side and serve composers.”

After graduating and studying voice in Germany, he found a niche as a choir conductor, which started his current career path; his full-time job is as the associate conductor of the Boston Symphony. “Working with choirs for me is always a great joy,” he said. “I look for those opportunities.”

Aside from choral music, one of Masur’s other great loves is J.S. Bach. He and his wife, pianist Melinda Lee Masur, lead the annual two-week Chelsea Music Festival in New York, and this summer’s theme is Bach’s 333rd birthday. Although the festival uses modern instruments and tuning, “we deliberately have Baroque specialists work with players who may not have that opportunity,” Masur said. “It’s so sad when we have this separation.” He is glad that symphony orchestras still program Baroque music, but he calls the Chelsea festival “a laboratory for understanding audience relations. We get a real cross-section of types.”

In his current job in Boston, he leads many non-subscription concerts as well as one subscription concert per year, serves as a cover conductor in case the announced conductor is indisposed, and works with youth orchestras at the summer Tanglewood Festival in western Massachusetts. “It’s like three generations,” he said, referring to the high school orchestra, college orchestra, and the Boston Symphony, “and they’re all feeding off each other.”

Masur went to Tanglewood in high school as a composition student, but now “it’s not even really that I’m on the other side,” he said. “I’m part of a like-minded collection of people who want to be immersed in music. You pack several years’ worth of learning and study into one summer, and you don’t complain. There’s something extraordinary about that environment.”

This week marks Masur’s debut with the Milwaukee Symphony, but he has done no special preparation for this ensemble. “I like to be completely open,” he said. “It’s a wonderful opportunity to stand in front of a new orchestra and explore the work at hand.” He knows some of the MSO musicians, and this week will be a chance to know them better. 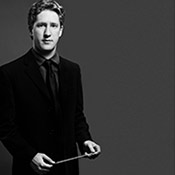