When the Bradley Symphony Center opens, the new portrait gallery will feature members of the Milwaukee Symphony in locations all over town – principal bassoon Catherine Chen at the Milwaukee Art Museum, first violinist Lijia Phang at the Mitchell Park Domes, violist Alejandro Duque at the Oriental Theater. But the eye behind the camera for every portrait belongs to another musician.

“And it’s funny, because I’m not a photographer,” said Margaret Butler, the MSO’s English hornist, who nevertheless has taken portraits of 50 musicians so far. “I’ve always wanted to paint my colleagues. The Dutch style, like Rembrandt or Vermeer, is exactly how you see musicians onstage, with a black background but this golden yellow glow on their faces.” When MSO management announced plans to devote a wall in the new atrium to portraits of the musicians, Butler got the job, and “spent thousands of dollars on cameras and lenses and light equipment.”

“We’re really fortunate we stumbled on Margaret in the early stages of her photography career, because she’s incredibly talented,” said Jennifer Samuelson, the symphony’s senior director of patron experience. “They’re so different from the normal portraits we see. These aren’t just a person and an instrument in an obscure background. They tell a story.”

With plenty of experience as a painter, “I thought of photography as a lesser art form,” Butler said. “I wanted canvas and oil and brushes. But once I understood the science of it, I was addicted.” The post-production editing of the photos, she said, is an art in itself. At first she wondered if it was dishonest to remove a pimple or a stray hair, “but if I was doing an oil painting, I’d do the same thing – bring out people’s best features. I’m painting with pixels instead of with oil.”

Getting people to relax in front of a photographer is “a skill aside from the technology,” she said. “Almost no one wants to have their portrait taken. I have to go into it with a sense of empathy and put them at their ease. I find people fascinating and I love to bring out their most beautiful side. That’s been the best part of this project, connecting with my colleagues and having them see what I see.”

The project has taken a year so far – the first shoot was assistant principal oboe Kevin Pearl, who showed up at the lakefront Colectivo wearing a teal shirt and with a teal reed for his oboe. Butler posed him in front of the coffee shop’s teal sign, and “I was like, what just happened here? That was not planned.”

Musician photo galleries are fairly common in the public spaces of major concert halls, but “usually everyone’s in a tuxedo and it’s black and white,” Butler said. “For this, I want people to say, ‘I’ve been there,’ to feel like we are part of Milwaukee.” She has worked with many venues to get permission to shoot, and “everyone is thrilled to be part of the new concert hall.”

Every musician suggests their own location, and Butler visits before the session to check out lighting and angles. Some have chosen their own homes – or back yards in the case of principal trombone Megumi Kanda, an accomplished gardener. Some have worked with Butler to create something elaborate or whimsical. First violinist Yuka Kadota’s shoot “was theater,” Butler said. “It was like a Mad Hatter tea party, with lots of teacups and pots and pastries, and Yuka standing behind it looking like her usual regal self.”

Every photo shows something about the musician, but every photo also has to include their instrument. Butler photographed principal trumpet Matthew Ernst, an accomplished do-it-yourselfer, with “all of his tools, a miter saw, a table saw, a level, a paint roller, a hand saw – and a trumpet.”

The 50 portraits she has taken are fewer than the orchestra’s total musician roster, but most of the rest are out of town while performances are suspended during the pandemic. For her own portrait, she arranged painting materials around her seat in her art studio, set up the lighting, and had her husband, Johnny Padilla, take the actual images.

“I’m grateful to the MSO staff. It was a real risk they took,” Butler said. “They had no idea what I was capable of, but it shows the vitality and resilience of this organization. And it’s opened a door for me personally, to get a new perspective on art that I needed.” 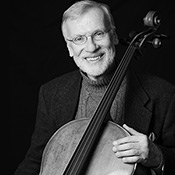 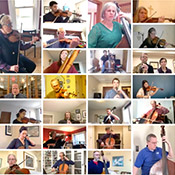 From Our Homes to Yours: Elgar’s “Nimrod”