Principal horn. The hot seat. Soaring solos produced by a fickle coil of metal tubing and a set of overworked facial muscles. Beauty mixed with potential disaster, like an ice skater launching a triple axel.

In his seventh season in this high-risk, high-reward role for the Milwaukee Symphony, Matthew Annin finds that “it takes a lot of mental preparation, which is almost more important than the physical work.”

The horn by its nature is difficult and unpredictable — the tiny mouthpiece, conical bore and extremely wide range contribute both to the beauty of tone and the tendency to miss notes. But composers and listeners love the sound that a good player can produce.

“One of the best pieces of advice I ever got was to stay in the present,” Annin says. In practice, that means that a player can’t think about how well or how badly the previous page went, or about the pitfalls waiting on the next page. “It’s so simple, but so true — and so hard to do.”

“Principal horn is one of the most difficult, high-profile jobs in the whole orchestra,” said MSO principal trombone Megumi Kanda, “but Matt always plays with such poise. It never gets the better of him. You’d never know it was a difficult instrument by the way he plays. He’s such an elegant, tasteful player, he makes me want to rise to his level.”

Before coming to Milwaukee, Annin played in the orchestras of Louisville, Rochester and Cincinnati, but he had always had the goal of a principal position. “I wanted to have my own voice,” he says, and the Milwaukee job was the first time he had played nothing but first horn since college. “It was an adjustment for sure, looking back,” he says. “To settle down and get comfortable takes time. Luckily, I had very friendly and supportive colleagues.”

In Cincinnati, Annin held the position of assistant/utility horn — a job in which, like a baseball team’s utility infielder, he had to be prepared to play first, second, third, or fourth. “Your high register and your low register always had to be great,” he says.

The Milwaukee Symphony does not have a utility horn, meaning that dividing the work among the section is more of a challenge. “Outside of the strings, the horn section is the biggest in the orchestra,” Annin points out. “Composers love horns, and we help to blend the woodwinds and the brass. But it takes its toll as the season progresses.”

Another adjustment to being the principal horn was learning to make musical and personnel decisions for the section, but Annin says that in his previous jobs he learned a lot, both positive and negative, from watching other principals. Somewhat unusually, his audition in the spring of 2011 took the form of playing a full week with the MSO, which he thinks was “a better way to represent myself. I could get a feel for the orchestra, and they could get a feel for me.”

The major work on this week’s program, Aaron Copland’s Third Symphony, does not have major horn solos, but Annin will be a prominent voice in the piece’s many brassy passages, including the reworking of Fanfare for the Common Man that opens the final movement. Coming one week after John Adams’ Harmonielehre, Annin says, “They’re very different pieces, but they’re two of the most important 20th-century symphonies.”

Annin lives in Whitefish Bay with his wife, Christine, a music teacher and substitute violinist with the MSO, and their four-year-old daughter — he vividly remembers falling asleep in a rocking chair with an infant in his arms, the night before he had to return to work in the orchestra and play the Brahms Piano Concerto No. 1.

He grew up in Nebraska, and feels that the hard-working culture that shaped him there is reflected in Milwaukee. “The MSO is a very hard-working orchestra,” he says. “The musicians, the staff, [Executive Director] Mark Niehaus — I identify with that. It’s something I really like.”

In the summer, Annin plays in the Peninsula Festival in Door County and the Grand Teton Music Festival in Wyoming, in a section led by Gail Williams, his former teacher at Northwestern University. “That’s pressure in a different way,” he says. “I want to rise to her level, because she’s such a phenomenal musician.”

For fun, fitness, and stress relief, Annin runs almost every day. “But I’ve stopped tracking my mileage,” he says. “I’m trying not to be so crazy about it.” 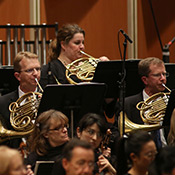 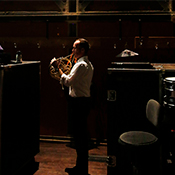 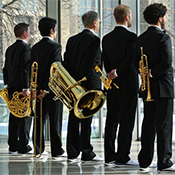