The three newest members of the Milwaukee Symphony are excited to have won their auditions, but they are waiting to know when concerts will be performed again before moving to their new city.

Over the course of the past season, the symphony held auditions for assistant principal cello, principal harp, and principal tuba. In normal times, the winners would be apartment hunting, making arrangements to move, and studying the music for the upcoming season. In this unusual time, they are waiting, along with the rest of us, for news of what comes next, while we introduce them to our MSO audiences.

New principal tuba Robert Black will stand out in the MSO, at least at first, because of his age; he just finished his first year of college. But “I don’t care how young he is or what experience he has, this guy is great,” said principal trombone Megumi Kanda. “I’m absolutely convinced he is the one. We’re lucky we grabbed him before someone else did.”

Black, a native of the Chicago area, began playing in fourth grade on a small tuba that was lying around the house; his mother is a band director. He joined the Chicago Youth Symphony Orchestra in sixth grade, which was “a really great program for me, to get all that experience playing in an orchestra so early,” he said.

The tuba was one of the last instruments to join the standard symphony orchestra; Berlioz was one of the first composers to use it in its modern form, in the 1830s. “It can blend with the string basses and bassoons and support them,” Black said, “and its presence on the low end of the brass really fills out the sound of the orchestra. There are a few moments in the repertoire where the tuba comes in at perfect moment and you feel the whole orchestra fill out.”

Black actually auditioned twice for the MSO job – once last June, when no one was hired, and again in January. At the first one, “when I found out he was in high school, I couldn’t believe it,” said Kanda. “He was mature way beyond his age. But we weren’t quite convinced if he was ready.” But he enrolled at Rice University in Houston, studied music theory and music history, played low brass excerpts with trombones, and worked to match others’ style and to “keep my eyes on the conductor and my ears on the section.” At the MSO’s second tuba audition in January, “he came back twice as good,” Kanda said.

“The possibility that I could win was in my mind the whole year, that I might be dropping out of college for this,” Black said. “I jampacked everything that I could into one year.” His parents want him to finish college, he noted dryly, and he plans to in a few years, after he earns tenure with the MSO. For now, “my goal show up to the first rehearsal and seem like I’ve already played the piece ten times.”

Like Black, new principal harp Julia Coronelli grew up in the Chicago area and started her instrument young. She was entranced by the harp when she saw it at a wedding at age 2, and started playing a lap-sized Celtic harp a few years later.

But the full-sized orchestral instrument is a different animal. “It’s like a piano but without the black keys,” she said. “The black keys are my pedals. There are seven pedals and three settings for each one, so your feet are flying everywhere.”

Harpists often get hired for solo background music at parties, and “we have to move a 6-foot-tall instrument, and I’m slightly under 5 feet tall, so people are shocked to see me getting it out of the car by myself,” Coronelli said. “The hardest part of a gig isn’t playing, it’s moving. And you’re usually wearing your concert clothes, so it’s very hard.”

As a teenager, she took lessons from Sarah Bullen, the Chicago Symphony’s principal harp, and she continued studying with her at Roosevelt University in Chicago. That was also how she got her first chance to substitute with the CSO. The day after Coronelli’s senior recital, “I got a call from her asking, ‘Are you downtown right now?’ I said I was, and she said, ‘Go to Orchestra Hall, because I’m really sick and you’re playing principal in two hours.’” She had never heard of Stravinsky’s Oedipus Rex, the featured piece on the program, but that night she basically sight-read it, sharing the stage with musicians she had looked up to her whole life. “It felt like most magical dream, but it was also terrifying.”

Following college and graduate school, Coronelli played three years with the New World Symphony, the noted training orchestra in Miami. In the two years before she won her most recent position in the Sarasota Orchestra, she was “based in Chicago but performing with orchestras all over the country.” During that time, she substituted twice with the MSO.

Since most orchestras employ only one harp, auditions are relatively rare, and “they always attract all the best people in the world, so you always know the people who do well.” The Milwaukee audition was the seventh time Coronelli reached the final round, and “it was the best feeling in world when they told me they had chosen me.”

But right now, “this is the longest I’ve ever gone since I was 10 years old without playing with an orchestra,” she said, “which is very difficult, and makes me think about how much of my identity is being part of an orchestra.” She has spent time in quarantine reading, cooking, and going for walks, because “those are the things I can do. Restaurants and traveling are my other favorite things, and I can’t do that now.”

“I’m looking forward to returning to the Midwest,” said Nicholas Mariscal, the MSO’s new assistant principal cello, who comes directly from the New World Symphony. He grew up in Tucson, Arizona but did his undergraduate degree at Indiana. “I’m a desert rat at heart,” he said, “but I also like colder climates.”

The New World Symphony functions like a professional orchestra in terms of daily rehearsal and performance schedule and community outreach, but Mariscal said there was a larger focus on chamber music than he expected. And between working with music director Michael Tilson Thomas and getting sectionals and lessons from visiting conductors and soloists, “I knew it would be a good experience, but it was far more valuable than I expected it to be.”

Moving directly into the assistant principal seat will bring extra pressure, Mariscal said, “but it’s pressure that I want. I look forward to being in leadership capacity, whether it’s principal or assistant.” He had taken 11 full-time auditions before winning the Milwaukee job, but he has only auditioned for principal or assistant principal jobs. In the final round, playing chamber music with other MSO string players, “it was a chance for them to see how I play with them, but it was also interesting to see how it might feel for me. You have to make sure that you and the orchestra are the right fit for each other, and I have a really good impression of the MSO musicians I’ve met so far.”

After the coronavirus ended New World’s season in mid-March, Mariscal quarantined in his Miami apartment complex with other young musician friends for several months before returning to his parents’ house in Arizona. “And it’s extremely hot all the time, so I’m still basically stuck indoors,” he said. He enjoys running and biking, but it has to be first thing in the morning, “when it’s 90 degrees instead of 105.”

His parents are music supporters and fans, but Mariscal is the only performer in the family. He  began piano lessons at age 9, and seriously studied composition as a teenager. When the Tucson Symphony played one of his pieces as part of a young artists’ program, the conductor suggested Mariscal learn an orchestral instrument, and he picked cello semi-randomly. For some years, he studied piano, cello and composition together, but as an undergraduate, “I trusted my gut that cello was what I loved most, and I solely focused on that. And I’m glad I did. Cello felt like my voice.” 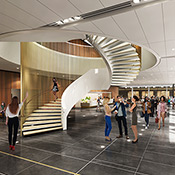 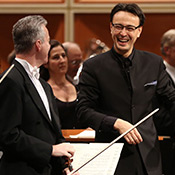 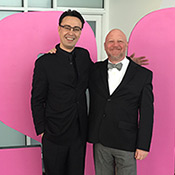