It will be a weekend of firsts when Ken-David Masur walks to the podium to open the Milwaukee Symphony Orchestra’s 2019-20 season: Masur’s first concert as the new MSO Music Director and the first Milwaukee performance of pianist Nicolas Namoradze. But while Namoradze and Masur are “new” to Milwaukee, they are not new to each other. And their history will certainly inform the musical give-and-take when they perform Schumann’s Piano Concerto in A minor.

Masur and Namoradze first met in 2012, when they were both fellows at the Boston Symphony Orchestra’s Tanglewood Music Center. As part of their residency, they worked on and performed Olivier Messiaen’s Oiseaux Exotiques, a 1956 composition based on the songs of “exotic birds” from around the world. It was a bold choice for Namoradze’s American debut. But it is an appropriate reflection of Namoradze’s interest in music that is “off the beaten path.”

“It’s always special to be able to bring music to audiences who will be hearing it for the first time,” Namoradze tells me from his home in New York City, “and to try to present it with as much conviction a I can.”

This interest is reflected in both his recital programs and his recent recordings. He’s recently been exploring the music of York Bowen, a little-known British composer from the early 20th century (he’ll record his music for Hyperion later this year). He is also known for showcasing some of the most challenging work in the repertoire, including the Etudes of Alexander Scriabin and infamous, knuckle-busting arrangements of Chopin Etudes by Leopold Godowsky.

“I definitely enjoy challenging myself and trying to play the hardest pieces I can get my hands on,” he says. In fact, he played one of most daunting of the Godowsky-Chopin pieces in the prestigious 2018 Honens International Piano Competition. “It definitely was a bit of a stunt,” he admits, “but I think I managed to pull it off.”

Indeed he did. He won the Honens, which supports its winner with a three-year artistic development program. It gives you all the things you need, he says, a press team, management, concert opportunities. “It’s an ideal way to begin one’s career.”

Yet, Namoradze’s interest in what he calls the “less-explored corners” of the repertoire doesn’t affect his love for beloved masterpieces. While some pianists might look self-consciously for a unique approach to a piece like Schumann’s concerto, Namoradze prefers to come to the music without an agenda. “I think that every musician has his or her own artistic personality,” he explains, “and if you are true to that personality, your interpretation will inevitably be different from someone else’s.”

And Namoradze’s personality is certainly unique. In addition to his love of little-known works, he is also a composer, which plays an integral part of his approach to a classic like the Schumann concerto. “I try to always think from the composer’s perspective,” he explains. “I try to get into the composer’s head—try to understand the different musical decisions—and then try to reverse the process, to try to really encode that in my own approach.”

Examining Schumann’s decisions, one is likely to focus on his desire to create a new kind of concerto. For decades before him, a concerto was primarily a showcase for the soloist—the orchestra staying firmly in the background. Schumann, however, wanted to create music that was more of a conversation between soloist and orchestra. Writing in 1839 in Neue Zeitschrift für Musik—the magazine he co-founded a few years earlier—he anticipates a composer “who will show us in a newer and more brilliant way how orchestra and piano may be combined,” a work in which the orchestra is “no longer a mere spectator.” Two years later, he explored this idea in the Concert Phantasie for Piano and Orchestra, and in the summer of 1845, this work was transformed into the first movement of a fully realized Piano Concerto in A Minor, Op. 54.

For Namoradze, the genius of this concerto lies in the transformation of a large orchestra into more individual units. “It is really an enormous piece of chamber music,” he explains. “I think the piano’s close connections with individual members or smaller ensembles within the orchestra makes the process of performance very very special.”

“It’s a great experience when one is engaging more intimately with the orchestra,” he continues. “One has to flip one’s attention from one part of the orchestra to the other—rather than just minding your own business at the piano.”

“It’s such a perfect piece of music, really,” he adds. “And to play it with a conductor you know well, and knowing the Milwaukee Symphony Orchestra and what an amazing ensemble they are, I’m so looking forward to this very special project.” 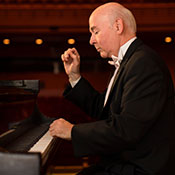