Luther Gray: The Voice of the MSO

The way Luther Gray tells the story, he tried to talk the Milwaukee Symphony out of hiring him, but they insisted anyway.

Gray is now the patron services and group sales manager, in charge of the symphony’s in-house ticket operation. But 22 years ago, he was an aspiring college graduate who had made a good impression in a few MSO temp jobs while hoping for an offer from a big accounting firm. When a permanent position opened up in the box office, he was urged to apply. “The manager was telling me, ‘You’ll be great at this,’” Gray recalled, “and I’m like, ‘You want me on the phone telling people about Beethoven and Mozart?! I can’t do that! I don’t know that!”

Regardless, he got the job. An R&B and rap fan on his own time, he began attending MSO concerts, “and I could close my eyes and feel the music. I had never felt that before. And I could see what they were talking about.”

As director of group sales, one of Gray’s responsibilities is to make sales calls at retirement homes. “Sometimes people overlook the elderly,” he said. “I try to pump them up. I tell them that a concert is going to change their life.” For something like this weekend’s Rhapsody on a Theme of Paganini by Rachmaninoff (one of Gray’s favorite composers), “you’re going to feel it. You can’t not feel it.” He tells people about his own classical journey and concludes, “You need to do it, for no other reason than to uplift your own self. You have meaning. You may not be what you once were, but you always want to feel alive. Music matters. You matter.”

For decades, Gray has been the MSO’s voice on the phone, the guy who straightens out seating requests, calms angry customers, and makes recommendations. What concert would my son enjoy? Where will we park? What restaurant do you recommend? What section of the Marcus Center has the best sound?

“Everyone knows Luther,” said Jennifer Samuelson, the MSO’s director of marketing. “People light up when they talk about him, and they’re excited to see him face to face. He’s such a warm, sunny, smart guy. We’re really blessed to have him as one of the faces of the organization.”

Gray also has to manage the sale of seats in three or four different venues during normal business hours, and coordinate with those venues on concert nights to make sure that everything runs smoothly. If tickets for the live soundtrack performance of “The Empire Strikes Back” are on sale at websites of both the MSO and the Riverside Theater, Gray has make sure the same ticket doesn’t get sold twice.

In that sense, his job will get easier once the orchestra moves into the Warner Grand Theater in September 2020. But running the box office for a venue that the symphony owns, and that it has to staff at all hours, will be a new challenge. Gray says he is already going to Marcus Center staff for advice to make sure the transition goes smoothly.

Once a season has been set, Gray helps to divide the concerts into subscription series, trying to balance out the pianists, the violinists, the choral concerts – and next season, the debut of new music director Ken-David Masur, who will have to be on every series at least once. If customers say, “I like four concerts in the B series and three in the A,” box office workers will encourage them to buy the B series and do exchanges into the other concerts. “We have a very, very flexible exchange policy when you’re a subscriber,” Gray said.

Ticket sales via the internet now make up over 35 percent of the MSO’s total volume. Does that make less work for the box office staff? “You’d think,” Gray says with a rueful laugh. Many online ticket buyers may still need assistance, and for slightly more complicated matters such as exchanges, patrons still prefer to talk to a real person on the phone.

That means that Gray and his coworkers have developed personal connections with many audience members; it even extends to getting cookies in the office sometimes. “People say, ‘Luther, you took care of me years ago and you’re my guy,’” Gray says, “but I also remember how that person was ready to bite my head off.” When customers are unhappy, “they want you to listen to them. So I listen all the way through, without interrupting. Let’s walk through what the issue is. By the end of the conversation, they get it. I love challenges. The goal is to make the customer happy at the end of the call, but to do what I need to for the symphony.” 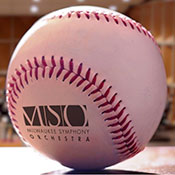 VIDEO: Take Me Out to the Ball Game