An “unstageable” play known for its accompanying music will soon share the stage with the Milwaukee Symphony at the Bradley Symphony Center.

A new version of Peer Gynt – both the play by Ibsen and the music by Grieg – will make its two-year-delayed debut March 25-27, with actors, puppeteers, and a Norwegian fiddler joining the Milwaukee Symphony Orchestra and Chorus.

The goal is an even balance of music and theater, said director Bill Barclay, who wrote a totally new adaptation of Ibsen’s play. The original three and a half hours is now 16 abbreviated scenes, to “get the story across at wicked speed, and to endear Ibsen’s characters to the audience.” The effect is like sketch comedy, he said, but with the orchestra as the protagonist.

The story of Peer Gynt’s performance history, like the original Norwegian folk tale, is complicated. Ibsen’s sprawling verse play was originally published in book form. But when he was persuaded to try staging it, he approached Grieg to write incidental music for the production.

In the 19th century, when recorded sound was unknown and many theaters had their own pit orchestra, incidental music for plays bore some resemblance to modern film scores. After the initial run of Peer Gynt, Grieg extracted two suites from his score that became a staple on orchestral programs.

As well as re-assessing Ibsen’s contribution, Barclay and MSO Music Director Ken-David Masur took a long look at Grieg’s. Aside from the two suites, the rest of the music lay forgotten until 1980, and there are “so many delicious little pieces of Grieg that people don’t know,” Barclay said. But playing all of it straight through would not serve a 21st-century artistic experience any better than performing Ibsen’s entire play, so many decisions have been made about what to cut, what to keep, and “the jigsaw puzzle of where the cues go.”

And there are no purists to disappoint, either. Masur said that in his archival research in Boston, he found a letter from Grieg to the original stage director that authorized him to use the music or skip it, as necessary. “That gives us license to re-order and to cut some,” Masur said, “if it’s not contributing to the flow or what we envision.”

A one-hour version of the collaboration was performed at Tanglewood in 2017 by the Boston Symphony, where Masur was the resident conductor at the time, and “as soon as I got the Milwaukee job, I wanted to do the full version,” Masur said. His own history with the work includes many performances in the chorus under his father, the famed conductor Kurt Masur.  This weekend’s MSO performances will be the premiere of the evening-length version, after the pandemic wiped out concerts set for the spring of 2020.

This production, Barclay said, is “what happens when music and story are on an equal footing.” When “no group of artists is more important than another group,” it allows a mutual admiration to unfold that the audience can sense.

Masur suggested that what the MSO is putting together might count as a “Gesamtkunstwerk,” Wagner’s famous term for a work of art in which all elements are equal. “I think it’s a play with an orchestra,” he said, “but we’re not in the pit. The interaction with the actors onstage will make it extremely dynamic.”

The Bradley Symphony Center was built without a space for an orchestra pit, but Masur said, “The flexibility of the space is only limited by our imagination.” In addition to the auditorium, the action of Peer Gynt might unfold in the chorus loft, or the future organ loft, or anywhere else that Barclay might think of.

It has been decades since Masur led a fully staged opera – many of his family are in the business, but “I always thought this is not for me.” But, he continued, “I love the symphonic vocal repertoire. Maybe it’s inevitable at some point, but for now, this is the closest I get.”

Peer Gynt will be performed with costumes and props but without scenery, which would block the view of the orchestra. Actors will also use the full auditorium and “appear in surprising places,” Barclay said. But this performance is still being presented in a symphony hall, and “musicians have a sixth sense. If they think they are being taken for granted, the magic of the concert hall diminishes.” 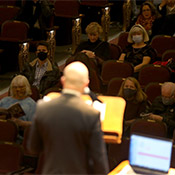 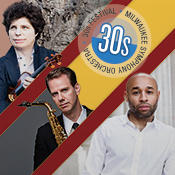 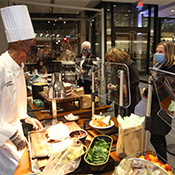