When Kevin Pearl plays the oboe solos in “Peter and the Wolf” for the Milwaukee Symphony’s upcoming family concert, he’ll be sitting down and wearing a suit and tie. It’ll be a change from the last time.

Peter and the Wolf, written by Sergei Prokofiev as an educational piece to demonstrate the instruments of the orchestra, has taken on many different forms  – including the woodwind quintet version that Pearl and colleagues took to dozens of schools in the Houston area while he was a graduate student at Rice University.

The five musicians narrated the story and moved around the stage in basic costumes while they played. Since the oboe represents the duck, “I had a yellow raincoat, which was very hot, and a duck bill visor that went on my forehead,” said Pearl, who is now the MSO’s assistant principal oboe. He narrated in a nasal voice, and in the chase scene, he and the horn player representing the wolf ran around the stage before he lay flat on his back to play the duck’s dying solo. “I had a sore elbow a few times from landing on hard cafeteria surfaces,” Pearl said, “but nothing bad ever happened to my oboe.”

The concert on Sunday, Nov. 3, the only family concert of the 2019.20 season, will have visual and storytelling elements supplied by Really Inventive Stuff, but Pearl and the rest of the MSO will be in their usual spots.

Peter and the Wolf has led a charmed life – it was written to be educational, but it is still the work of a major composer. “Prokofiev’s harmonic language is very accessible, but it’s also a little zany,” Pearl said. “He’s the perfect person to have done this. He captures the characters of the animals and the people so well. I know very few other pieces that put a picture in your mind so colorfully.”

And the flute music, representing Peter’s friend the bird, is regularly asked on orchestra auditions. “It’s very difficult, with the high fast leaps,” said Heather Yarmel, the MSO’s assistant principal flute. When she used to do flute demonstrations in schools, she would play Peter and the Wolf, because “it’s playful in character, but it also gave me the opportunity to practice a difficult excerpt in front of a tough audience. Kids are totally honest. They’ll cover their ears if it’s too loud.”

Prokofiev is certainly not the only composer to use the flute for bird music; Mahler, Messiaen and Saint-Säens also come to mind. “Going back hundreds of years, bird songs are an easy way to represent nature in music,” Yarmel said. “My house has two big trees in the back yard, and I sit there and listen to the wildlife, and it’s amazing to hear how musical it is.”

But the duck is “a hard stereotype to shake” for the oboe, Pearl said. “In junior high band, all the kids tease you that the oboe sounds like a duck. But maybe they know Peter and the Wolf already? Which came first, the duck or the egg?”

And the bassoon, which represents the grandfather? “It must be strange for the conductor to look and see a young Asian woman,” said MSO principal bassoon Catherine Chen. “I’ll never be a grandfather in my life, but the Russian composers often used the bassoon for that wise old grandfather persona, and I try to get that quality in my playing.”

Chen’s first experience with Peter and the Wolf was unusual – at age 14, having decided she wanted to play bassoon, she went to the Microsoft Encarta online encyclopedia to learn more about the instrument, and she found an audio clip of the grandfather’s music. “So my first exposure was also my first exposure to the bassoon.”

Assistant principal clarinet Ben Adler, however, grew up with two professional clarinetists as his parents, and he would often hear his mother playing the cat’s music from Peter and the Wolf. The cat’s big solo, when it chases the bird up the tree, is also frequently asked on orchestra auditions, so Adler knew it well before he first performed the entire work with the MSO.

“The solo is very visual, but Prokofiev was a visual composer anyway,” Adler said. “And cats are sneaky animals. I’ve got a cat of my own, and he will look at birds out the window and make noises at them. So I have a good example at home to follow.” 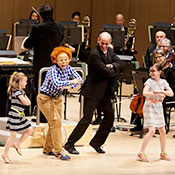