Although Slocum, the Milwaukee Symphony’s principal flute, does not play in the first or third concertos, which are on this weekend’s program at the Basilica of St. Josaphat, the Baroque masterpieces were a tradition on Christmas morning when she was growing up, playing on a loop as the family opened presents.

And she sees a special connection between Bach and the flute, which is why she’s thrilled that the master of the early 18th century is making a relatively rare appearance on a symphony orchestra program. “Bach is one of the great gifts of choosing the flute,” she said. “It was the first instrument, besides voice. It’s a primal thing to play it.”

Slocum will be playing Bach’s Magnificat on the second half of the program, and she will be experimenting by using a wooden head joint (for an authentic tone quality) with the conventional metal body of a modern flute (for projection).

After sticking to one flute for years, she has begun experimenting with different makes and models, and with combining different head joints. How many flutes does she have? She pauses and smiles, and finally answers, “A lot.” But she has identified one that works best in large orchestral pieces, another for soloing, another for Beethoven, etc.

After trying other instruments as a child, “flute felt easy,” Slocum said. “The sound just came out, and I felt like this was what I had been looking for.” Her mother, a professional bassist in New York City, tried to talk her out of it because it was such a competitive instrument, “but it was easiest for me, because I hadn’t felt that kind of symbiosis with any other instrument I had tried.”

A few years ago, Slocum set up a recording of the Bach Orchestral Suite No. 2 in B Minor, collaborating with friends from her time as an undergraduate at the Curtis Institute of Music. The recording is available on YouTube and for download. In the future, she hopes to do more recordings of Bach solos and chamber music, again experimenting with instruments that might get her closer to the sound the composer intended.

When Slocum won the MSO audition in 2012, she was 22 and in her first year of working on her master’s degree at the Manhattan School of Music. “It was such a daunting experience, to have my first job be at the level of this orchestra,” she says. But former music director Edo de Waart, who hired her, “gave me the freedom to be me,” she says. “He helped me grow as an artist. There were definitely times I wish I could have taken back, but I needed those times to teach me things.”

“Sonora is a real artist,” said principal oboe Katherine Young Steele, who sits next to her. “I’m super fortunate that we’ve developed a relationship where we get each other. We play really well together.”

At first, Steele said, she worried about the differences between them, such as the 10-year age gap and her own Midwestern background, “while Sonora’s a very serious New Yorker. But she’s so fun, and actually very chill. It’s been a fun five years.”

Slocum’s practice habits vary depending on her mood. Sometimes to challenge herself she’ll do nine hours a day, “but for a wind player, that completely blows out your face.” More sustainably, she will do a very mindful two hours, “thoughtfully and with joy.” She thinks back often to her 12 years of ballet classes as a child and is looking into adult options in the Milwaukee area, because playing music and dancing are intertwined. “The more you master the fundamentals, the more free you are in the moment. It’s like that with music and with dance and with a lot of other things.”

Looking ahead, she said, “I’m excited about where the orchestra is at the present moment and where it’s going. There’s a lot of excitement, and it’s such a great orchestra – even better than it was when I started, and it was really good then. To come together this way is wonderful.” 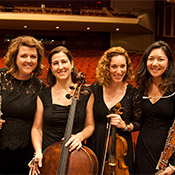 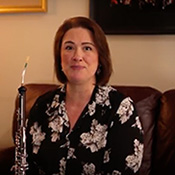