Steve Lippia Gives Voice to the Songs of Sinatra and Friends

Steve Lippia has been singing the popular standards of the great American songbook for decades. But when he studies a new song, his first consideration is how Frank Sinatra would sing it.

“It’s just become my approach,” said Lippia, who will perform with the Milwaukee Symphony this weekend. “You could give me a song Sinatra never heard of, and I would think about how he would approach it – or Nat King Cole, or Tony Bennett.”

That diversity of singers gives the show its title, “Sinatra and Friends.” It’s not a reference to the Rat Pack, the much-publicized gang of entertainer pals in the 1960s – it’s more a nod to the style of song and performance that dominated popular music until the arrival of rock and roll.

Why does Sinatra endure, more than 20 years after his death? “Part of it is his persona, what we’d call his brand now,” Lippia said, “but he had a wonderful voice, and the ability to tell a story and sing a song in a way that was compelling and convincing. He became a part of the American cultural consciousness.”

Sinatra came to fame with Tommy Dorsey’s big band in the 1940s, and he credited Dorsey, a trombonist, with influencing his sense of phrasing and style. “He wasn’t a jazz singer, but he had a jazz sensibility,” Lippia said, “and many jazz musicians do look to him.” And as Sinatra got older and his voice eroded, “he still had a great way to tell a story.”

Even today, Lippia said, singers such as Jane Monheit, Harry Connick Jr., and Michael Buble carry Sinatra’s legacy, and Ol’ Blue Eyes himself borrowed from Bing Crosby. “No one lives in a vacuum,” Lippia said. “We’re all influenced by those around us, and Sinatra was no exception.”

Lippia performs the songbook standards in the original style, but without imitating anyone’s voice or mannerisms. “I’m being authentic, but my voice is in that pocket,” he said. He has noticed slight changes in his own voice over the years, but “look at Tony Bennett. He’s still performing in his 90s, and why should he retire? His voice isn’t what it was, but he’s still enjoyable to listen to, because of his phrasing.”

Bennett has talked in the past about the regimen of vocal exercise that keeps him in shape, but rehearsal and performance are enough for Lippia. He has to pace himself carefully on a weekend like he’ll have in Milwaukee, with three performances in less than 72 hours. “You can run out of gas,” he said. “There have been times at the Sunday matinee when I think to myself, ‘Oh, I shouldn’t have belted so much last night.’”

His calendar contains many appearances with jazz big bands and symphony orchestras, and each have their pluses. “A 16-piece big band is a speedboat, and an orchestra is a cruise ship,” he said. “The small group can turn on a dime, but the orchestra offers all these beautiful amenities – the strings, the harp, the French horns. It’s an opportunity to indulge in beautiful ballads.” But even so, he said, over the course of his performing career he has seen orchestras grow more accustomed to “how to swing, how to pop.”

Sometimes Lippia daydreams about doing an evening of rock music – but at this point in his life, he has been typecast as a crooner. “People want to hear things they know and like,” he said. And the standards that he sings are, if not a closed canon, one that is not expanding quickly in the 21st century.

But within that niche, Lippia feels fortunate to connect with audiences. He has never performed with the Milwaukee Symphony before, but “it’s been near the top of my bucket list for a while,” he said. “It’s one of the top orchestras in the country, with a great legacy and great reputation.” 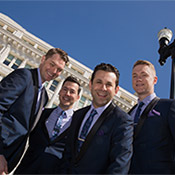