Supporting the Arts During a Pandemic

How has the Milwaukee Symphony stayed in business for ten months with no ticket revenue? An important part of the answer has been generous donors who increased their giving when the pandemic hit.

During fiscal year 2020, the MSO’s annual fund showed an 11 percent increase over projections. Of the orchestra’s overall contributed revenue, 41 percent comes from individual donors, which numbered 2,121 at the end of 2020. Those individual gifts were instrumental in the orchestra continuing to deliver on its mission during the pandemic, and they will continue to be just as important as the MSO weathers the effects of the pandemic.

“If we ever gave a little extra money, this is the year to do it,” said JoAnne Krause, who was an active volunteer for years, singing in the Milwaukee Symphony Chorus and helping as a docent and in fundraising. She has fond memories of the orchestra’s tour to Japan in the 1990s, and of the annual visits to northern Wisconsin. Now she and her husband, Donald, are retired, “and we go to the concerts and send in our contributions.”

“I enjoy live music so much,” said Sally Swetnam, a retired occupational therapist who lives in Greenfield. “I follow the orchestra, and I know who the principals are, and if one of them’s not there, I wonder why. It’s kind of like sports.” At a reception where she talked to several current musicians, “I was totally star-struck, but they were so nice.”

Some years ago, Swetnam upgraded her Uihlein Hall subscriptions to box seats. “I considered that a donation, because I couldn’t really afford a box seat. Now I’m able to give a little more.” When the pandemic hit, she donated the value of her unused tickets. “I’d be heartbroken if something happened to the symphony,” she said. “It would be hard to think of anything worse.”

As a board member, Dick Stoll thinks about keeping patrons engaged with the symphony during the long shutdown, “and one way to stay engaged is to show support through contributions. I just feel obliged to show my support. We need to keep it going, because everything is fragile with COVID.”

When Stoll and his wife, Susi, moved to Milwaukee in 2013, after 45 years in Washington, DC, “I was amazed,” he said. “I had never heard of the Milwaukee Symphony, and I was amazed at the quality. I kept telling people that one of the best things about the move is that we can go to the symphony.” Later, he took a place on the MSO’s board, “but more than board members, my wife and I are major fans.” Now that he is retired, “our life revolves around church and the symphony.”

Not being in the new hall is a disappointment, of course, “but what could we do?” Stoll said. During the pandemic, he has watched a lot of video that MSO musicians have posted on their social media channels, and “now we’re looking forward to the virtual season. I’m learning more about Vimeo.”

The virtual season of streamed concerts from the new hall “may provide access to more people,” said Eric Vogel, another dedicated supporter. “It’s a teaser, a visual introduction to the splendor, and it can inspire people to come to the performances.”

His wife, Megan Holbrook, served nine years on the MSO’s board, and “that family became our family,” Eric said; and it didn’t hurt that they were living on the same block as Andreas Delfs, then the MSO’s music director. “There’s a strong and deep non-musical connection to the symphony.”

Megan’s time on the board overlapped with the first exploration, in the early ’00s, of converting the Warner Grand Theater into a new home for the MSO, and Eric, an architect, would take his students on tours of “the best-kept Art Deco secret in Milwaukee at the time.” He appreciates the new hall for music, architecture, and urban development; the hall will be one more piece to attract downtown activity west of the river, along with the Brewery District and Fiserv Forum.

When the symphony plays for the first time in a hall expressly designed for orchestral music, “it’s going to be something no one in Milwaukee has experienced,” he said. “There’s no other way to experience that grand scale of sound, or to reproduce it.”

But while audiences wait, “we’re all worried about how the symphony can survive,” Megan said. During the pandemic, Eric has realized that he doesn’t really miss restaurants or movies, but “what I missed the most was the public gathering of the symphony, hearing that sound with friends and strangers. It made us willing to re-commit in a more significant way.” 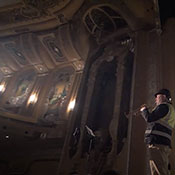