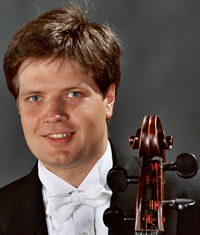 Cellist Adrien Zitoun joined the Milwaukee Symphony Orchestra in 2001. He also performs with Present Music and the Philomusica String Quartet, which has residency at the Wisconsin Lutheran College. Mr. Zitoun teaches at the Wisconsin Lutheran College, coaches the Milwaukee Youth Symphony Orchestras, and has a handful of dedicated private students.

In 2016, Mr. Zitoun, along with his cellist wife Braden Zitoun, co-authored the book Play Cello Today!, published by Hal Leonard. He recently received the 2017 CIVIC MUSIC Certificate of Excellence for Studio Music.

In 2001, as a member of the Eusia String Quartet, he was awarded the Gold medal at the Fischoff Chamber Music Competition and the Music Pen club award in Japan for the best Chamber music recording in 2006 for their recording of music by Britten, Purcell and Takemitsu.

In his native land of France, Mr. Zitoun studied cello at the Conservatoire National Supérieur de Musique in Lyon with Yvan Chiffoleau. In the United States, Mr. Zitoun earned his Artist Diploma and a Masters of Music from Indiana University where he studied with Tusyoshi Tsutsumi and Janós Starker.