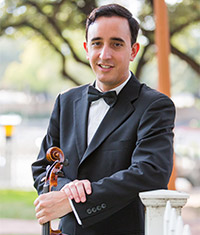 Coming from Austin, Texas, Alejandro was a member of the Austin Symphony and the indie band Montopolis. He has performed at numerous music festivals such as the Tanglewood Music Center, Aspen Music Festival, Music Academy of the West, and the New York String Orchestra Seminar. More recently, he has been a guest artist at the Sunset ChamberFest, Caroga Lake Music Festival, and Lakes Area Music Festival. Alejandro received his Bachelor of Music degree at the University of Southern California under the mentorship of Donald McInnes and most recently his Master of Music degree at UT Austin under Roger Myers.