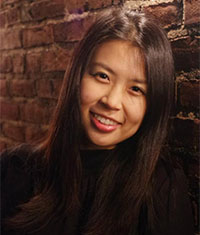 Hyewon Kim started playing the violin in her native Seoul, South Korea when she was 6 years-old. At an early age, she was recognized by winning prizes from prestigious competitions in Korea: Eum- Yeon, Chun-chu, and the Music Journal. While attending Ewha Womans University, she earned the opportunities to perform numerous violin concertos with the Ewha Orchestra. As a chamber musician, Hyewon was the first violinist of the EN Quartet in Korea, which won the Haneum Chamber Competition in Korea.

Hyewon was a full scholarship recipient at Ewha Womans University, where she earned a Bachelor’s degree, and again at the Yale School of Music for a Master’s degree, studying under Ani Kavafian. In recent summers, she has served as Concertmaster and Principal chairs in the Tanglewood, Castleton Music Festival, Schleswig-Holstein Music Festival, Spoleto Music Festival, Pacific Music Festival, and National Orchestral Institute. In 2013, she was selected by Maestro Lorin Maazel to perform the Verdi String Quartet as a Castleton Chamber Player. Other chamber music collaborations include those with Nick Cords, Colin Carr, Philip Setzer and David Finckel from the Emerson Quartet. She has performed in prestigious venues throughout Korea, Japan, Germany, Denmark, Austria, and the United States.

Hyewon has been a substitute violinist at Baltimore Symphony Orchestra and Pittsburgh Symphony Orchestra. She also served principal positions in many orchestras in the central Pennsylvania area. Hyewon recently finished a doctorate program at SUNY Stony Brook as a full scholarship recipient, studying with Soovin Kim and Philip Setzer.