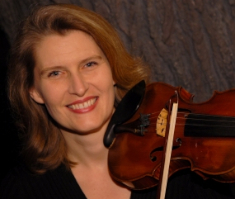 Lisa Johnson Fuller, violinist, has been a member of the Milwaukee Symphony Orchestra since 1997. Lisa began the violin at age three with Rebecca Sandrok and the Suzuki method. Her continued violin studies included teachers George Perlman, Zvi Zeitlin, Roland & Almita Vamos, and Paul Kantor. Lisa received a Bachelor of Music degree from the University of Minnesota. She has also studied at the Eastman School of Music and was a Fellowship student at the Aspen Music Festival.

Before joining the MSO, Lisa served as principal second and then concertmaster of the New World Symphony under the direction of Michael Tilson Thomas. When freelancing in Michigan, Lisa’s performances ranged from symphonic fare in Grand Rapids to Motown groove with Stevie Wonder. Lisa has soloed with several orchestras including the DuPage Symphony, Chicago String Ensemble, National Repertory Orchestra, New World Symphony, and Milwaukee Symphony Orchestra. As a chamber musician, Lisa has participated in the Aspen Festival Chamber Series, New World Chamber Series, and the Washington Island Music Festival. Lisa has also performed in Japan, Cuba, Costa Rica, and throughout Europe as both an orchestral and chamber musician.

Lisa is now very happy to have made her home in Wisconsin with her husband Bill and daughter Clara.