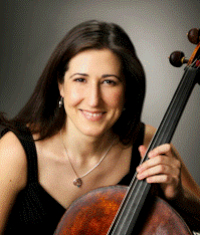 Increasingly recognized for her “arresting performances” (The Philadelphia Inquirer) and “honestly self-revealing playing” (The Broad Street Review), cellist Susan Babini has performed throughout the United States, Europe, and Asia. Of her recent East Coast première-performance of Aaron Jay Kernis’s Colored Field for Cello and Orchestra with Symphony in C, The Philadelphia Inquirer wrote that “she was a beacon of clarity with a lean sound and a stoic emotional reserve…The performance was everything it could be.”

Ms. Babini has been presented by Artists International and the Violoncello Society of New York, and has appeared in Lincoln Center’s Alice Tully Hall and Weill Recital Hall at Carnegie Hall. In 2005 she appeared as both Guest Principal Cellist and soloist with the Saint Paul Chamber Orchestra, performing Haydn’s Sinfonia Concertante under Roy Goodman. She is a winner of Astral Artists’ 2007 National Auditions and, as a winner of the San Francisco Conservatory’s concerto competition, she performed Ernest Bloch’s Schelomo with the Conservatory Orchestra.

Also an avid chamber musician, Ms. Babini was recently named principal cello of the New Century Chamber Orchestra. She toured Central Asia as a member of the Phoenix String Quartet, under the auspices of Carnegie Hall and the U.S. Department of State. She has also performed and taught throughout Panama as part of the Tres Americas Project and toured with the Mark Morris Dance Company. A participant of the Tanglewood Music Festival, Italy’s Spoleto Festival, and at the Marlboro, Yellow Barn, Chesapeake, Delaware, and Kneisel Hall chamber music festivals, she has also performed in Germany’s Kronberg masterclasses. She has collaborated with such artists as Bernard Greenhouse, Gilbert Kalish, Manahem Pressler, Joseph Silverstein, Mistuko Uchida, and Donald Weilerstein.

Recently, Ms. Babini collaborated with the Daedelus String Quartet for the Rioult Dance Company in New York’s Joyce Theater, performing Air by Aaron Jay Kernis. Other recent engagements include tours with the New Century Chamber Players and “Musicians From Marlboro,” a solo recital for the Philadelphia Chamber Music Society, and Brahms’s B Major Piano Trio and Schumann’s Piano Quartet at the Aspen Music Festival with renowned violinist Nadja Salerno-Sonnenberg and pianist Anne-Marie McDermott.

Susan Babini received both a Bachelor and a Master of Music degree from the San Francisco Conservatory of Music, and a graduate diploma from The Juilliard School, where she was a teaching assistant for Bonnie Hampton.