Erika, a mother of two young children in western Milwaukee County, would sing to her toddlers every night through good times and bad. When things got worse and she received help from Sojourner Family Peace Center, the Lullaby Project “sounded like it was just for me.”

The Lullaby Project, now finishing its third year as a Milwaukee Symphony community engagement program, pairs parents or guardians in difficult circumstances with trained musicians. Together, they create a song to sing to the parent’s children, and finish with a professional recording of the lullaby.

It sounds simple, but participants rave about how transformative the experience is. “It profoundly changes them,” said Stephanie Birr, a healing support specialist at Sojourner. “They believe the world is good again and that people care about them.”

“It’s changed everybody who’s been associated with it,” said John Tanner, co-owner of Tanner Monagle, the music production studio where the songs are recorded. “It humbles everyone. We’re thankful to be part of it.”

In Erika’s case, she met with Eric Segnitz, a busy freelance violinist in the Milwaukee area, who quickly put her at ease. He asked about her children, about what kinds of music she liked to share with them, about what she wanted her song to say. “I was going through so much, and I was getting out everything I was feeling in little bits and pieces,” she said. But when Segnitz read it back to her, “it sounded really great. He made it happen. I had it all in me, and he took it, word by word and line by line.”

Walking into the studio to record her song was a foreign experience, but Tanner “made it easy,” Erika said. “I think that’s what he was put on this earth for, to help bring music to life.” She sings her song regularly to her 2-year-old and 4-year-old at bedtime, and they now request it.

When the MSO first approached Sojourner about the program, “we thought, Oh my gosh, that’s everything we’d want a client to experience,” Birr said. “It’s about individual choices and literally finding your voice and sharing your story.” Sojourner’s clients are working through crises in their lives, and “everyone is nervous or they don’t think they’re creative or have a good voice, but the orchestra is so good at shaking that out of them.”

As time goes on, more women have chosen to perform their songs themselves at the final concert, rather than giving the task to a professional singer. “I’m so proud of our clients, your heart soars,” Birr said. “It’s the coolest thing they’ve been a part of. I can’t praise the orchestra and the teaching artists enough, especially this year. They worked so hard to get it to the finish.”

The program originated with Carnegie Hall, but it “looks very different everywhere it’s done,” said Rebecca Whitney, the MSO’s director of education. Across the country, it is sponsored by many other institutions besides orchestras, including libraries and community colleges; and the clients sometimes come from prisons or refugee camps as well as domestic violence shelters.

The musicians who sign up for the project have to be “totally open and nonjudgmental,” Whitney said. “They have to really listen to the moms and build trust and confidence in a very short period of time.” In learning what the mothers want to say in their songs, they also often hear the story of their lives, and “it’s not a therapist, but they almost play that role. They have to be accepting and not be shocked by anything.”

And the program participants, she added, come from all walks of life – some live in affluent suburbs, or have professional careers, or are sending their own children to college.

MSO bassoonist Beth Giacobassi’s participation this year was extra poignant. She and her husband, Mike, an MSO violinist, became first-time grandparents on March 13, just as pandemic lockdowns began. In addition to assisting a Sojourners client, Giacobassi wrote two songs of her own for the grandson whom she could see but couldn’t hold. “The purpose of a lullaby is to make you feel close. It’s something of your own that you have control over,” she said. “I didn’t realize until now, that’s the same as the moms we’re working with.”

One mom “wanted something very tender and serene,” Giacobassi remembered. “There was abuse going on, and the child was having terrible nightmares. And the song became ‘We can turn your nightmares into dreams.’” When the song was performed for an audience at last year’s public concert, “everyone cried, and I was shocked. I didn’t realize it was so moving.”

“Every one of the moms is a braver person than I’ll ever be in my life,” said Tanner, who works with two participants to write their songs as well as supervising all recordings. “What they get up and face every day is way beyond my ability. It’s an honor to work with them.”

Along with everything else, the pandemic has disrupted the Lullaby Project, which usually ends its year with a concert at which the participants perform their songs. This year, Whitney said, the songs were recorded using social distancing precautions, and an MSO Musical Journeys podcast has replaced the live concert.

“The most touching thing is seeing what it does to all the other so-called teaching artists,” Tanner said. “We’re all knocked out by how much the moms have given us in support, love, and compassion. These women have something they need to tell the world. We are lucky to be part of this.” 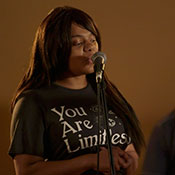 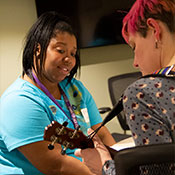 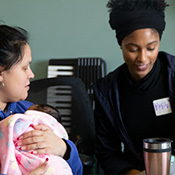