A few months ago, violinist Philippe Quint was listening to a recording of the Mendelssohn violin concerto on his car radio. He thought it sounded OK, but it didn’t match the way he would do it.

“And then imagine my surprise,” Quint said, “when the piece ended and the announcer said, ‘That was violinist Philippe Quint.’ I did not remember my own interpretation.”

For an artist like Quint, who will perform Bernstein’s Serenade after Plato’s Symposium with the Milwaukee Symphony in January, such incidents are an occupational hazard of rethinking his approach to the violin repertoire. If he comes back to a work after not performing it for two or three years, he buys a new score and fills in new markings and notes for himself, in order not to be distracted by his previous thoughts. Over the course of years, he will have had new experiences, met new musicians, gained new insights. “I love the process. It’s limitless. There will never be a perfect performance – God forbid that ever happens – but it’s important to be happy with it in the moment. It’s only a step – What do I do next? Where do I take it to the next level?”

That, he said, is one reason why he’s looking forward to performing the Bernstein with Music Director Laureate Edo de Waart. On Quint’s last visit to Milwaukee, two years ago, he performed the Korngold violin concerto, a staple of his repertoire, but de Waart “had a whole slew of discoveries. He’s very detail-oriented and a wonderful musician.”

Quint describes Bernstein as one of three people he most wishes he could have met in person (the others are Paganini, for “nerdy technical stuff” about violin performance, and Beethoven). But he does have the advantage of working with many musicians who did know Bernstein. Carl St. Clair, music director of the Pacific Symphony, was one of Bernstein’s last conducting proteges, “and Bernstein told him, ‘Always show the audience the joy of music-making,’” Quint said. “Carl said that that changed his life – and by passing the story along to me, he changed my life as well.”

Another conduit was Michael Stern, music director of the Kansas City Symphony and son of the violinist Isaac Stern, for whom “Serenade” was written. His contribution to Quint was having been in the room “while Lenny and Isaac were on the phone talking about the concept of the piece.”

And what is Quint’s concept of the piece? “It’s a Greek party. It’s five or six Greek philosophers, each striving to be more eloquent than the others.” That might not seem like the likeliest premise for a violin concerto, but “it’s a fantastic story,” Quint said. “The subject matter, the way Bernstein expounds it, is very exciting.”

Bernstein was one of the few American composers that Quint heard while growing up in the Soviet Union. When he moved to the United States as a teenager in 1991, he was excited to discover other composers such as John Corigliano, Ned Rorem, and William Schuman, but more than a decade elapsed before he performed the “Serenade.” Now, it is one of his favorite concertos, and the upcoming Bernstein centennial has put it on a lot of orchestras’ programs this season.

A few years ago, Quint took a camera crew onto the streets of New York and asked people about classical music. “That video may be my biggest legacy,” he said. His random sample found that most people knew little about it, but also had little exposure to it.

“And that brings us back to Bernstein,” Quint continued. “He engaged the New York community and the New York Philharmonic like no one before and no one after. He infused his passion into people, and he left a legacy that passes through the audience. If we had more folks like that, there would be no crisis in classical music.” 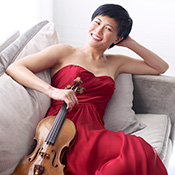