Tagged Under: Board of Directors, MSO Notable, Stars of Tomorrow, Supporter, Volunteer

Taking some time to answer that question may be more important now, after Baird’s death last fall at age 95. She was the symphony’s No. 1 cheerleader, fundraiser, ticket-seller, and awareness promoter for many decades, from the organization’s fledgling days in the 1960s until poor health forced her to step back in recent years.

“Her enthusiasm was just boundless,” said Linda Tojek, a former MSO League president who knew Baird for 40 years. “I never knew anyone with such energy.”

In the symphony’s early days in the 1960s, enthusiastic volunteers, mostly female, were vital for raising funds and selling tickets. And Audrey’s motto, Tojek said, was “if you don’t ask, you won’t get anything.” That was how she got items like fur coats and speedboats to be raffled off in support of the symphony.

“I always thought of Audrey as someone who lived, breathed, ate, and slept symphony,” said Judy Harrison, another former president of the MSO League.

“She founded and started almost every project,” Tojek said, such as the fashion show and ball as fundraisers, as well as the Kinderkonzerts (now Family Series) and the Stars of Tomorrow program. The latter institution has been chosen by the symphony to perpetuate her name.

But capturing her spirit is harder. Tojek reminisced about Baird’s song-and-dance routine – literally – to sell tickets. Baird and a group of 10 or 12 other women would set new lyrics to classical music or show tunes, and do presentations to any civic group that would have them, in order to promote the symphony. In the last years of her life, as Parkinson’s disease slowed her, Tojek remembers her saying, “The most frustrating thing is that I can’t get out of this wheelchair to dance.”

Beyond Milwaukee, Baird enjoyed a national reputation as an orchestra promoter, giving presentations in towns of every size about how they could energize their symphony. Tojek roomed with her several times at national orchestra conferences, “and she’d be going until 11:00 at night, even when I had a presentation at 7:00 the next morning, and I’d have to say, ‘Hey, Audrey, I have to get some sleep.”

Roger Ruggeri, who played bass with the MSO from 1962 until 2014, said that when he served on a National Endowment for the Arts panel in the early 1970s, “when people found out I was from Milwaukee, they all asked if I knew Audrey Baird.”

The MSO’s early days, Ruggeri said, were “rudimentary, but it was kind of exciting to start something from the roots and get it done.” For years before and after the orchestra’s founding, the Chicago Symphony made regular visits to Milwaukee, but Baird insisted that the city needed its own outstanding classical ensemble. “She was very effective at getting people excited about the orchestra.”

She also helped mentor a younger generation of arts enthusiasts. “She was always young at heart and young in mind,” Tojek said. “She had friends of all ages. Age didn’t bother her at all.” Harrison agreed, “She just enveloped you with open arms into liking her, liking what she was doing, and doing it yourself.”

Harrison said that whenever she talked to Baird, “she always ended her conversation with ‘Thanks a million!’ That phrase is still with me, any time someone helps me out. You just knew she meant it.” 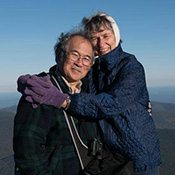