More than 40 years after Star Wars became a cultural phenomenon, the Milwaukee Symphony will perform the live soundtrack this weekend to the movie that many fans, and orchestra members, believe is the best of them all.

Episode 5, The Empire Strikes Back, released in 1980, was the first exposure for some fans of a certain generation. Bass trombonist John Thevenet saw it in the theater at age 9 and still ranks it at the top, “because the story and imagery were amazing. That backlit moment when Darth Vader is waiting for Luke in the Cloud City has been copied by movie after movie. Darth Vader is easily my favorite major character. Best villain ever.”

Stage manager Amy Langenecker saw the very first Star Wars movie in the theater at age 7. “I was crazy about it and I remember for Christmas getting books and the LP,” she said. “The LP is framed hanging in my living room today!” As a kid, “I loved the droids, light sabers and space ships. As an adult, now I see it from a grownup’s point of view — politics, power, greed, survival, life etc.”

“It’s one of my favorite films of all time. I can’t count how many times I’ve seen it,” said Tristan Wallace, the MSO’s production technical manager, who is responsible for setting up the actual film projection system. At the Riverside, he is excited that the Cinemascope screen will allow for a bigger, brighter picture.

Wallace grew up watching the original trilogy, and loves the prequels too — making him a minority among MSO personnel who were interviewed. Langenecker and Thevenet, like many other hardcore fans, dislike the prequel trilogy. (Episodes 7 and 8 have recently been made available for orchestral performance; the prequels are not.)

Because the Riverside uses a front-projection system, musicians who sit behind the screen, including the brass section, do not have a view of the action. (Uihlein Hall’s rear projection system lets them watch from behind.) But Thevenet said, “I know the movies well enough that I can visualize what is happening, whether I can see it or not.”

Second violinist Paul Hauer, however, can see the screen and will be enthusiastically watching when he’s not playing. “Episode 5 is the best, no discussion,” he said. Hauer, too, grew up with the films, and as an adult, “the lessons from Yoda helped me take orchestra auditions,” he said. “ ‘Do or do not. There is no try.’ But mainly I like how confidently Han Solo takes risks. That speaks to me.”

Principal trumpet Matt Ernst also has applied Yoda’s wisdom to his instrument. The original trilogy was a backdrop to his childhood; he never had the experience of being shocked at the secret of Luke Skywalker’s parentage. Now, he said, “I like them all the same. If I had to pick a favorite, I would choose The Force Awakens. Not that it is a better film than the original, but the experience of watching it for the first time with my wife and kids was so gratifying and nostalgic. My kids even like the prequels!”

When Ernst plays the famous opening theme, he thinks about Maurice Murphy, the late principal trumpet of the London Symphony, who performed on the original soundtrack. “The very first note in the part is a high B flat,” Ernst said. “I can close my eyes and hear that note with Maurice’s sound so clearly in my head.”

Any film score is first recorded in a studio over a period of days or weeks, and is not designed to be played straight through. “Endurance is an issue with any John Williams score, but it is a part of the job,” Ernst said. “Also, this brass section plays so well together that I often find myself floating on top without much effort. But with all that said, sometimes you still do get tired. Specifically for Star Wars, there is a lot of unison, so we can trade off.”

Principal horn Matt Annin also has to think about endurance, but another challenge is that “during a long dialog section with no playing, it is easy to begin to check out, and then suddenly there is a long section of complicated music with sudden tempo changes,” he said. “Your brain has to reengage quickly. Otherwise, you might as well grab some popcorn.”

Last year’s MSO performances of the original movie, now titled A New Hope, drew enthusiastic crowds. “The response was amazing,” Thevenet said. “People cheering for the heroes, booing (and some cheering) for Darth Vader, and roaring applause after the credits for the orchestra. The audience also cheered very loudly when John Williams’ name showed during the credits. I loved that.”

Audiences this weekend can expect an even bigger, better experience at the Riverside. “It’ll be unlike any concert the Milwaukee Symphony does,” said MSO marketing director Jennifer Samuelson. “It’s an event. It’s a spectacle. It’ll look like you’re stepping into a Star Wars movie.” Audience members are encouraged to come early for photos with costumed re-enactors, and the Riverside staff has transformed the front of the house. “They’re as excited as we are, if not more,” she said. “It’s something we plan to emulate in the new hall,” when the symphony moves into the former Warner Grand Theater in 16 months.

But even then, the MSO will still perform in the Riverside when it needs a venue with more seats, or when Riverside management wants to put on a show of its own. “We have a really close relationship, and I think it’s unique in a city of this size,” Samuelson said. “It makes it a really special event for the audience, the musicians, and the staff.” 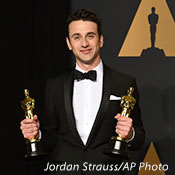