When Christopher Miller began attending orchestra concerts regularly, he looked around and quickly realized that “there are rules here, but I don’t know what the rules are.”

As a graduate student at Marquette two decades ago, Miller enjoyed the sense of ritual and the musicians’ warmup. But he didn’t know why one violinist got a round of applause for walking onstage, he didn’t know what a concertmaster was, and he didn’t know who Frank Almond was. All of those pieces took a while to put together.

Now an experienced concertgoer, Miller has recently become president of Forte, the symphony’s umbrella organization for volunteers. But along with thinking about how volunteers can support the work of the MSO, he also wonders how to make the institution more accessible.

His involvement as an MSO volunteer dates back six years, when decided he needed something new in his life and went to the orchestra’s website to learn about volunteer opportunities. In the past, he has helped organize MSO Mondays, the series of free chamber music concerts at area Colectivo cafes, and he stepped up to become president of Forte in November. “If you stick around long enough, people think you know something,” he joked.

In past decades, the MSO, like many cultural institutions, had a women’s auxiliary that performed various volunteer functions like fundraising and event management, but “over the last 30 years that’s been professionalized,” Miller said. In 2012, the Milwaukee Symphony Orchestra League changed its name to Forte and was folded into the MSO. Now it’s in a process of asking, “What is Forte, what should it do, and how should it contribute to the mission?” Miller said. “Identity and mission is an incomplete process.”

A significant new opportunity for Forte may come when the MSO moves into the Bradley Symphony Center in the fall. “In our own hall, we’ve got to staff our own hall,” Miller said. Up until now, the Marcus Center provided the ushers for MSO concerts, but “that’s a source of a new need. So we reframe Forte – it’s what the symphony needs, and Forte exists to help the symphony.” In the first year in the hall in particular, he said, the symphony may need extra ushers to help direct people.

The hall, too, could bring in a new audience of people who know little about classical music but want to see the venue, and the MSO needs to “take advantage of the opportunity at every level of the institution,” Miller said. “We should create opportunities for outreach and concerts that are approachable.” Good communication from the podium, or from musicians in a smaller setting, “helps people who might not think of themselves as symphony people say, ‘I could go to that.’” Yaniv Dinur, the MSO’s resident conductor, has a particular talent for connecting with audiences, and Miller said that his wife is always eager to attend a concert Dinur conducts.

Miller’s career began as an itinerant history PhD, teaching adjunct classes at universities all over southeastern Wisconsin. He found a niche in online education, helping UW-Milwaukee faculty develop and learn techniques for distance learning. When that job was eliminated, he went to work at Northwestern Mutual, overseeing the surprisingly complicated process of moving money around within the corporation.

“Every person who contributes to the symphony without being paid helps it to do more,” he said. “If nothing else, let’s recognize the fact that people volunteer. We need volunteers to help with back operations, education initiatives, small talk with donors. There are different skills. The business plan of the new hall requires it.”

The artistic goals of the symphony require it, too; the highly regarded Milwaukee Symphony Chorus is all-volunteer, which makes it “critical to the success of the music the symphony can program.”

What are his skills? “Answering questions like that,” he answered. “How do you get from Point A to Point B. That’s what modern knowledge work is about. Northwestern is relationship-driven; people do business by getting together and talking. Recruiting volunteers is a similar thing.” 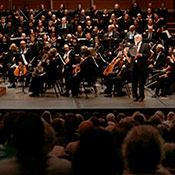 Donors & volunteers in many roles are vital to our success