Local audiences did not get a chance to watch a live television broadcast of the Milwaukee Symphony inaugurating its new home in October. But on New Year’s Eve, the MSO returns to local PBS airwaves for the first time in years.

Milwaukee PBS, which had made plans in pre-pandemic times to broadcast the opening performance from the Bradley Symphony Center, will air a concert of archival recordings interspersed with footage of the new concert hall and an interview with MSO President Mark Niehaus. The program will air on December 31 at 7 PM on Milwaukee PBS channel 10.

PBS often broadcasts concerts on New Year’s Eve, and “we said it had to be the MSO,” said Bohdan Zachary, vice president and general manager of Milwaukee PBS. “This has been the most challenging year of our lives, and we’re ushering in a new year of greater hopes.”

A live broadcast in October “would have been a wonderful thing,” Zachary said. “But the interest is still there on both sides.”

Planning was well underway for the opening weekend broadcast when the pandemic hit, including hiring a freelance director who specializes in televised orchestra concerts. “We had many meetings,” said Susan Loris, the MSO’s executive vice president for institutional advancement. “We had everything ready to go. And then we had the combination of the pandemic and the flood.” The water damage in the basement of the Bradley Symphony Center would have prevented opening on time, even if no one had heard of the coronavirus.

But the advance planning for placement of cameras and cables is still serving a purpose; Milwaukee PBS has given the MSO plenty of advice on how to configure a brand-new performance space for video production. “We would not be where we are with planning our virtual season without Milwaukee PBS,” Loris said. “We’re all learning, but we’ve basically become a TV studio. They’ve met with us on numerous occasions in the last nine months and increased our knowledge of how to use visuals.”

When the symphony does present its first full-scale classical concert for an audience in the new building, Milwaukee PBS will broadcast it, and there is a strong possibility that it could also be distributed for national broadcast as part of PBS’ “Great Performances” series. In the meantime, to prime local audiences for future excitement, on Dec. 31 the station will share two works recorded by the MSO under former music director Andreas Delfs: Brahms’ Second Symphony from 2003, and Dvorak’s Sixth Symphony from 2006.

Before the mid-2000s, the MSO had been a regular presence on local public television, but funding dried up around the time of the 2008 financial crash. In looking for concerts to re-broadcast this winter, Zachary said that the station and the symphony wanted “a great performance and a great visual,” meaning that choices were mostly confined to the high-definition era.

In coming seasons, “I would love to build on what we do next fall together,” Zachary said. “We share a lot of supporters in common who are passionate about each institution, and we celebrate the community we are in.” Loris agreed, “With one program under our belt, there will be a lot of opportunities to create dynamic content for the community. We can use television as a platform to reach a much broader audience than 1,700 people in the hall.”

Like the MSO, Milwaukee PBS had to make a lot of changes in a hurry when the pandemic hit in March. “We were not shutting down,” Zachary said. “We were committed to telling stories. Everyone stepped up, and we used every means possible to tell our stories as part of the history of this time.” The disruption of old routines also means that more people are watching the station’s programming on a phone or a tablet instead of in their living room at a predetermined time. But, Zachary said, “I’m happy that we have all managed our way through a difficult time, and that we’ve stayed in touch and re-committed to bringing performances to our local community, next fall and beyond.” 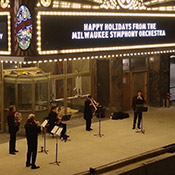 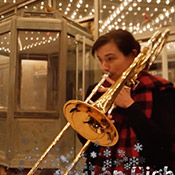 MSO Winter Quintet: The Holly and the Ivy 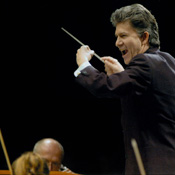 Twice as Nice: Catching up with Andreas Delfs